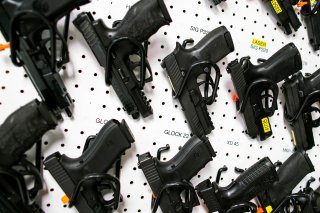 Media reports have tried to tie the record sales of firearms in 2020 and early 2021 to the increase in homicides in the nation's cities. While many factors in the soaring numbers of murders were noted – including the pandemic-driven loss of social programs as well as societal and policing changes following the death of George Floyd – many reports simply went with the simple solution: More guns led to more deaths.

According to John Lott, gun rights advocate and president of the Crime Prevention Research Center, the increase in the number of firearms shouldn't be seen as the root cause for the spike in violence that occurred during the pandemic.

"It is pretty shocking to me how we have all this discussion out there with these public health people and a lot of the media talking about gun sales as being responsible for the increased crime, and it's like they haven't even looked at the number of crimes committed with guns," Lott told the Washington Examiner.

A Review of the Numbers

An NPR report found that while 2020 did see an increase in homicides, overall violent crime also increased by about 5 percent from the prior year. Violent crime includes assault, murder, robbery, and rape.

In 2020, according to the Federal Bureau of Investigation's (FBI's) Crime Data Explorer, there were 538,203 violent-crime incidents, and 640,836 offenses reported in the United States by 9,991 law enforcement agencies that submitted National Incident-Based Reporting System (NIBRS) data, covering 53 percent of the total population.

Lott added that the U.S. media should be focused on all violent crime, not just gun-involved crime – which gets the lion's share of media reporting.

"But the point is even though those types of crimes increased, the number of crimes involving guns fell dramatically. And so they can't go and say that the increase in aggravated assaults and murders were due to the increase in availability of guns for criminals," he said. "If you look at the distribution of murders in the United States, over half the murders occur within 2 percent of the counties. What you need to do to reduce gun crime is the same thing you need to do to reduce violent crime. You go and arrest more people. You give more money to police. You go and put criminals in jail for a longer period of time. But we've been doing the exact opposite."

In fact, Americans seem to be coming around to the fact that the police may not be able to protect them, which is why support for gun control has been on sharp decline. According to a Trafalgar Group survey, just 15.6 percent of American voters said that they believed gun laws could address the retail crime surge including "mob-style" crime grabs.