This Gun Was Used by Winston Churchill and By Hon Solo (Yes, in Star Wars) 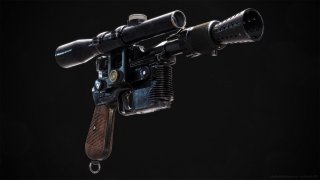 As one of the earliest “self-loading” or “automatic” pistols to be developed the German Mauser Construktion 96 (C96) differed greatly from the handguns to come. That could explain why it attracted unconventional thinkers and was the primary handgun carried by Winston Churchill and T.E. Lawrence (of Arabia). The pistol it was the preferred sidearm of the Sultan of Constantinople’s bodyguards, while unlicensed copies were produced in Spain and China and used in each nation’s civil war by soldiers on both sides.

While not an exactly famous weapon it can be seen in countless films including Star Wars.

Much like the unconventional thinkers who relied on it, the C96 was quite unconventional in its own right. And unlike the German-made Luger P08 or American Colt 1911 .45, which placed the magazine well in the handgrip—a feature almost universal with semi-automatic pistols today—the C96 had a distinctive integral box magazine in front of the trigger, which held an impressive ten rounds.

It also had a 5.5-inch barrel, which helped greatly with accuracy—while its wooden box-like holster doubled as a detachable stock, essentially transforming the pistol into a carbine. Most notably, the original C-96 was chambered for the 7.63x25mm Mauser cartridge, which was the highest-velocity commercially manufactured pistol round until the development of the .357 Magnum cartridge in 1934.

The German-made handgun earned a number of colorful nicknames over the years. It was known as the “Box Cannon” for both the internal magazine and the powerful cartridge. And due to its thin pistol grip, the C96 was often called “the broomhandle.”

The C96 was just the sort of weapon that military planners should have wanted to add to their weapons arsenal.

Yet, when the three Federle brothers—Joseph, Fidel and Friedrick—developed the revolutionary handgun in 1893, which was quite a departure from the revolvers of the era, the German military didn’t seem all that impressed. Other militaries were equally indifferent—automatic pistols were still largely unproven. Waffenfabrik Mauser—the maker of the German 98K bolt action rifle—instead offered the weapon for civilian sales.

Only finally during the First World War, when demand for the Luger pistol couldn’t be met, did the German Army finally adopt the weapon—but then in 9mm so as to standardize the ammunition. Those pistols had the number “9” engraved and painted bright red on the grips, as a way to avoid confusion with the 7.63mm versions.

While the weapon wasn’t as popular as the Luger with the German Army, it found success around the world as a private purchase weapon. It was used in numerous conflicts and was surprisingly a favored weapon by both sides in the Russian Civil War—and as noted was also favored in the Chinese and Spanish Civil Wars.

Mauser produced some one million of the C96 pistols from 1896 to 1937, but untold numbers—possibly in the millions—were produced in China and Spain. The weapon was used in dozens of conflicts around the world and has remained a favorite with vintage gun collectors.

Today in the United States ownership/use of shoulder stocks or similar aids with firearms with a barrel less than 16 inches is highly restricted under the National Firearms Act of 1934, which also regulates the ownership of machine guns.

As such it would seem that owning a vintage C96 and stock would be a problem. However, as Ballistic magazine explained, “U.S. firearms law defines ‘curio and relic’ firearms as guns more than 50 years old whose worth derives primarily from their collector’s value rather than contemporary utility.”

For this reason, the ATF has exempted the C96—as well as Luger P08 pistols—and the handgun and stock can be legally owned today!

As noted, the C96 was carried by Winston Churchill while he served as an officer in India and later in Africa. Churchill had injured his shoulder while disembarking from a boat in India and it never properly healed. As he was a cavalry officer and found it difficult to use his saber in combat, he purchased a C96 pistol, which he carried in place of the standard issue Webley service revolver.

Churchill had suggested that the weapon saved his life when he took part in what has been described as the last classic charge of the British cavalry during the Battle of Omdurman in the Sudan in 1898. Churchill was actually there in an unofficial capacity as a war correspondent, yet managed to find himself in the thick of the action during the battle—which was a completely one-sided affair.

Late in the day some 400 cavalrymen including Lt. Churchill charged and engaged more than 2,500 Dervishes and in his subsequent accounts Churchill claims to have shot three enemy warriors at extremely close range. It has been debated whether his standard issue Webley revolver would have had the same effect at stopping the charging warriors but in Churchill’s mind the C96 made the difference.

The C96’s most famous user wasn’t the real-life British soldier-turned-politician but arguably a famous fictional space pirate. The weapon served as the basis for Han Solo’s BlasTech DL-44 heavy blaster pistol in the Star Wars films. A muzzle cone taken from an M3 “Grease Gun,” parts from a fire extinguisher and a rifle scope transformed the 19th century pistol into something that was both “futuristic” looking and yet was from long, long ago and in that galaxy far, far away.