Is This the Gun That Will Ultimately Beat Glock? 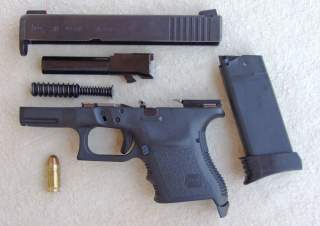 Faxon Firearms, known for their ARAK-21 multi-caliber gas-piston operated AR-style rifle and mid-range AR barrels, as recently plunged into the Glock clone market with the Faxon FX-19 pistol, which was revealed in June 2019.

The Glock is America’s most popular pistol. Used by almost every branch of the military and over 70 percent of police departments nationwide, the pistol is practically the gold standard from which all other modern pistols are judged. But with the popularity comes the clones. While attempts to mimic the Glock originally were from large manufacturers like FN, H&K, and S&W making their own polymer-framed, striker-fired pistols, recently smaller companies have been making practical clones of the Glock design itself, with almost no changes.

However, for this new generation of Glock clones, it is financially unfeasible to undercut the original Glock in price, as Glock has perfected the art of manufacturing their pistols over more than thirty years of production. Rather, the new set of Glock clones appears to attempt to build in common aftermarket features to produce a more customized version of the Glock.

Faxon Firearms, known for their ARAK-21 multi-caliber gas-piston operated AR-style rifle and mid-range AR barrels, as recently plunged into the Glock clone market with the Faxon FX-19 pistol, which was revealed in June 2019.

Like other Glock clones, the primary selling point is compatibility with existing Glock accessories and upgrades, while featuring many upgrades in the default feature set. For example, the FX-19 features an Overwatch Precision Glock trigger by default and a cut for a Trijicon RMR on the slide. In order to work well and cowitness through the RMR window, the FX-19 also comes with a suppressor height sights. Finally, the pistol switches the curved-bottom “Glock rail” for a standard M1913 Picatinny rail.

Ergonomically, the pistol features popular usual upgrades: undercut trigger guard, forward slide serrations, and a humpless 1911-style grip. Interestingly. Faxon appears to have gone with a Glock third-generation style mag release, as opposed to the larger mag releases on the fourth- and fifth-generation Glocks. The third-generation mag release is placed in a “bowl” unlike in Glock’s frame, which should make it easier to find and depress.

The FX-19 also features aggressive texturing on the frame, similar to that offered by custom Glock replacement frames such as the Polymer80 line, or companies that reprofile existing Glock frames.

So is the FX-19 worth it? It’s possible if the exact set of features someone would want from a Glock. However, many may not want the slide lightening cuts nor the fancy styling that the FX-19 brings to the table. With the wide variety of reputable manufacturers doing work on Glocks, finding one that can bring just the features one wants to a stock Glock is fairly easy and can be found for around the same price as the FX-19. The FX-19 also doesn’t have a frame-in-grip system like the ZEV Technologies OZ-9, one of its close competitors.