The Harrier: The U.S. Marine Corps Loves This Plane For 1 Big Reason 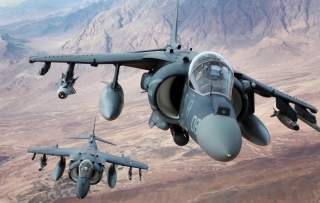 In fact, the Harrier II is serving at the forefront in the war against ISIL. When the U.S-Coalition intervention, Operation Inherent Resolve, commenced in summer 2014, AV-8Bs were once again among the first air assets to participate, flying reconnaissance missions and eventually transitioning to striking ISIL targets in both Iraq and Syria. As in previous wars, they flew from both ships in the Mediterranean Sea and the Persian Gulf as well as land bases in the region. These missions continue today, as the U.S. maintains its presence in the region to defeat ISIL and ensure a favorable post-ISIL state of affairs. Harriers have also participated in less-visible operations in Yemen by bombing al-Qaeda in the country—again emphasizing its flexibility and adaptability to a wide range of operations in diverse environments and levels of warfare.

Currently, the Marine Corps flies ‘Night Attack’ and ‘Plus’ Harriers in five active-duty squadrons plus one training squadron. They are divided among two home bases; Marine Corps Air Stations Yuma, Arizona, and Cherry Point, North Carolina. The Harrier II is in the process of being replaced by the Lockheed Martin F-35B Lightning II. Though mired in “development hell,” the Joint Strike Fighter (JSF), as the F-35 was conceptually called, promises to be a monumental leap in sophistication, to say nothing of its stealth capability. With V/STOL having proved its worth, the Marines pushed for the development of the B-variant possessing this capability, while also planning to purchase a number of the carrier-capable C-variant as well. Superior in armament, speed, combat radius, and avionics, the Lightning is undoubtedly a far more capable platform. But given difficulties in fielding the F-35, the AV-8B is slated to serve at least several more years—a decade longer than intended.

When the final chapter in the Harrier story is written, the Marines will bid farewell to an underappreciated aircraft that became much better over time and came through when it mattered most.