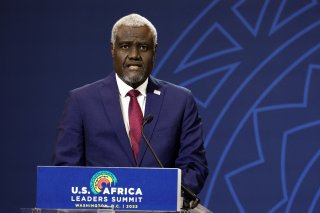 Before gathering for the U.S.-Africa Leaders Summit President Joe Biden is hosting in Washington this week, African heads of government caucused at an African Union (AU) summit in Niger’s capital, Niamey.

The message from that meeting was that Africa does not plan on being a hapless victim of climate change, but rather a big part of the solution. African leaders and entrepreneurs see in global warming the catalyst for Africa’s own long-delayed industrial revolution—one without smokestacks.

As the development economist Sir Paul Collier has shown, the secret sauce of the North’s prosperity was the quantum leap in productivity that occurred when English innovators harnessed looms and forges to CO2-spewing steam engines. Most of Africa did not get to make the productivity leap, which is why today’s annual per capita carbon emissions are 15.5 tons in the United States and 0.08 tons in the Democratic Republic of Congo (DRC).

The colonial powers used the continent as a source of unprocessed inputs for their mills. What they left was mostly a collection of resource-dependent rentier economies isolated from each other behind arbitrarily drawn borders and stuck at the bottom of global value chains.

In 2013, a new vision was put forward. The AU’s membership agreed on a fifty-year roadmap, Agenda 2063—The Africa We Want. Africa, they said, will be economically integrated through the African Comprehensive Free Trade Agreement (AfCFTA), now in the early stages of implementation. It will be industrialized, with diversified African industries and an energetic young population turning Africa’s rich endowments, as well as mineral and agricultural assets, into value-added products for African and world markets. Its voice will be fully heard in global decision-making.

Africa is often dismissed as a bystander in the global clean energy revolution. The facts say otherwise. As of February 2022, the United States generated 1,200 gigawatts of electricity from all sources. Estimates in a recent report by the International Renewable Energy Agency (IRENA) put Africa’s solar potential at more than six times that figure—7,900 gigawatts, assuming 1 percent land use—with wind providing another 461 gigawatts. The continent’s unexploited hydropower capacity is estimated at 1,753 gigawatts.

So, Africa has no lack of non-carbon-emitting energy to power an industrial revolution.

Nor does it want for the minerals—cobalt, nickel, lithium, manganese, copper, graphite—upon which batteries and other green technologies rely. In addition, the Congo river basin represents one of the world’s largest carbon sinks. Gabon absorbs the equivalent of one-third of France’s annual carbon emissions. The Republic of Congo, a fraction of the size of the DRC, absorbs 1.5 percent of global emissions.

Africans have rightly prioritized a seismic shift in their position as mere exporters of raw materials. They aim to process and add value to their natural assets. By deploying clean technology and vibrant global partnerships, Africa can successfully make this leap and realize its true potential as an economic powerhouse.

However, urgent action is needed. Today, a negligible share of Africa’s minerals is processed in Africa. China refines 73 percent of the world’s cobalt, mostly sourced from the DRC, 67 percent of nickel, 59 percent of lithium, and 40 percent of copper. It controls an increasingly large share of the African mines that extract these minerals. Its domination of the renewables value chain extends all the way to solar panels, lithium-ion batteries, and vehicles.

Unless China is willing to invest directly in Africa’s green industrialization, it will simply be behaving like another nineteenth-century colonial power. This presents an immense strategic opportunity for Washington.

To its credit, the Biden administration has joined the European Union (EU) and other allies to launch the Minerals Security Partnership. One of its objectives is “to ensure that critical minerals are produced, processed and recycled in a manner that supports countries in realizing the full economic potential of their mineral resources.”

The administration also deserves kudos, along with the EU and Australia, for backing South Africa’s five-year, $84 billion Just Energy Transition Investment Plan with loans, grants, and guarantees worth $8.5 billion. The plan is meant to speed up the conversion of South Africa’s largely coal-fired economy to one based on sun, wind, and hydrogen. The United States and its partners aim to de-risk and crowd-in private sector investment.

That is the right approach. Mobilizing patient, well-priced private capital in support of a decarbonized, twenty-first-century African productivity revolution—the Africa Africans want—needs to be a core U.S. goal. As the Economist recently reported: “A solar farm in cloudy Germany needs to earn only 7% to win funding … whereas a similar project in sunny Egypt requires a forbidding 28%.” That must change.

Serious consideration should be given to extending and expanding the African Growth and Opportunity Act (AGOA) and using U.S. tax incentives to encourage American private sector investments in Africa’s potentially transformative sectors, including renewables, health, and green infrastructure. Another promising initiative is Afreximbank’s Liquidity and Sustainable Facility, which is meant to facilitate Africa’s access to global bond markets.

Biden, a strong internationalist and alliance builder, should be applauded for his steps to move Africa to its rightful place at the forefront of America’s foreign policy agenda. But we need to move from aspirations to substantive actions; we have lost too much ground to China and others. Biden’s support for the AU’s inclusion in the G20 is a laudable move, but we need to go further in also supporting a permanent African seat on the United Nations Security Council. The U.S.-Africa Summit should be seen as the start of a longer journey. America needs enduring partnerships to support the region in delivering the Africa that Africans want and the world needs.

Rosa Whitaker, CEO of The Whitaker Group, served as the first-ever assistant U.S. trade representative for Africa in the administrations of Presidents Bill Clinton and George W. Bush.