Has the F-35 Joint Strike Fighter Killed the A-10 Warthog? 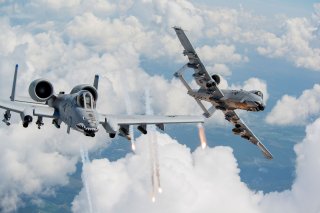 Is the Air Force finally going to sunset the A-10 Warthog? After years of contentious deliberations, the arrival of larger numbers of F-35 Joint Strike Fighters and the advent of new enemy weapons suggests that the distinguished A-10 may finally be headed for retirement.

According to the Air Force’s budget proposal, the service plans to divest twenty-one A-10s in 2023, indicating that the aircraft may not be optimal for conflict in the Indo-Pacific and for the kinds of missions it has performed for years.

“[W]e look forward to working with Congress to make sure that, again, we've got the right mix of aircrafts that are survivable, effective, and can provide our airmen, our guardians, the best chance of winning in INDOPACOM. The A-10 is just limited in its ability to contribute to that fight,”  Deputy Assistant Secretary For Budget Major General James D. Peccia III told reporters according to a Pentagon transcript.

The Pacific’s vast geographical expanse does not necessarily present combat conditions favorable to an A-10, but would likely be well served by long-range armed drones and fifth-generation aircraft that have the range and speed required to attack targets spread across wide swaths of ocean. In the Pacific, a land war on, for example, mainland China would seem much less likely, and an A-10 might have trouble reaching dispersed targets across areas such as southern Japan to Taiwan and the South China Sea. However, there is no reason why an A-10 based in Japan or Taiwan could not be useful in repelling an amphibious assault or ground incursion.

However, the advance of enemy precision weapons, air defenses, and shoulder-fired anti-aircraft guns are making the A-10 far more vulnerable than it has historically been. While the aircraft is well built to withstand enemy small arms fire, the global proliferation of shoulder-fired weapons such as MANPADS and other ground-fired, precision anti-aircraft weapons are making it more difficult for the A-10 to provide effective close air support for ground forces.

Yet the transition away from the A-10 will not be an easy process. Air Force leaders are well aware that it will take time to transition the service’s maintainers, trainers, and other personnel from the A-10 to other aircraft.

“[W]e look forward to making -- working with Congress to make sure that that, again, we've got the right profile and can make sure that we transition those personnel because it's not just the aircraft, it's the investment and the personnel as well as we transition to some of these higher -- more capable aircraft and the personnel needed to meet those requirements,” Under Secretary of the Air Force Gina Ortiz Jones told reporters, according to a Pentagon transcript.

Many of the retiring A-10s will be backfilled with F-16s Fighting Falcon fighter jets, service leaders said. However, the A-10s Close Air Support mission will likely be replaced by the growing number of F-35s fighters.