Has Germany Defeated the Coronavirus? 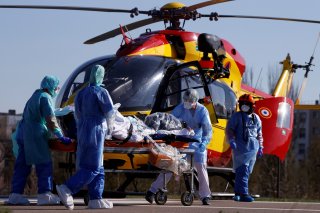 As the number of confirmed cases of coronavirus and the subsequent deaths continual to rise in places like Italy and New York state, other places in the western world are beginning to get ahead of the pandemic. Germany, through a strong public healthcare system and stringent quarantine measures, is beginning to see light at the end of the tunnel.

Despite earlier, apoplectic predictions, Germany has been able to keep a low death toll during the crisis. With over 26,000 positive cases, they have only had 111 deaths. This percentage far surpasses the countries of southern Europe, like Italy and Spain.

"We are seeing signs that the exponential growth curve is flattening off slightly,” said Lothar Wieler, head of the Robert Koch Institute. "But I will only be able to confirm this trend definitively on Wednesday."

This possibility of good news has not stopped Chancellor Angela Merkel from taking the virus deadly seriously. “The coronavirus is spreading with worrying speed through our country,” Merkel said on Sunday. The chancellor has been in self-isolation since Friday when she interacted with a doctor who tested positive for the coronavirus. She is currently undergoing regular tests.

“Our own behavior is currently the most effective antidote we have: to reduce public life as much as is possible, to reduce contact with people through whom the virus could be transmitted,” Merkel continued. “In short, that’s how we save lives.”

To this end, that same Sunday the German government released new rules of social conduct meant to prevent the spread of the disease. Set to be in place for two weeks, they are currently the most stringent and far reaching restrictions being imposed in the western world.

Restaurants, which had previously been allowed to stay open if they kept customers at a minimal distance, will be closed for in-service dining and only permitted to serve takeout. This measure has already been enacted in most of the United States for several weeks. Other businesses, such as barbers, hairdressers, and tattoo parlors will be closed entirely, which has likewise already been done in several U.S. cities.

Individuals will be permitted to leave their homes if they are shopping for essentials, visiting a doctor, or caring for relatives. The German government is not banning people from going outside to exercise or get fresh air, but it is requesting that they remain at least four feet apart from all other people.

The strictest rule is one banning groups of two or more people (excluding families) from congregating. In the United States, the rule is set at ten people.

Still, the situation in Germany is good enough that they’re actually accepting infected cases from other countries. While most of the world is ceiling off its borders, some German states are accepting a couple dozen afflicted people from France and Italy. “I think it’s a very, very important sign that we stick together and also help others when we have the opportunity,” explained Michael Kretschmer, premier of Saxony.