Has Japan Just Given Up on the Tank? 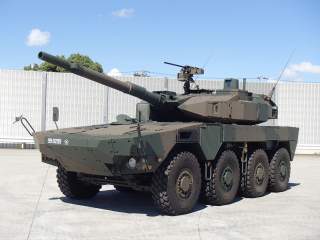 The Japanese Ground Self Defense Force has the unusual challenge of defending an archipelago of 6,852 islands that stretches over two thousand miles. Deploying powerful Type 90 and Type 11 Main Battle Tanks weighing around fifty tons to defend the smaller one would prove extremely difficult—so Tokyo has decided to eventually ditch half of its heavy tanks in favor of cannon-toting armored cars it can stuff into a cargo plane.

During World War II, Japan deployed independent light tank units to fortified island across the Pacific. However, in battles such as Peleliu, Iwo Jima, Okinawa, and even the Soviet invasion of the Kuriles, Japanese tanks fared poorly in the face of superior Allied firepower. For example, in 1944 at Peleliu island, fifteen Japanese Type 95 light tanks weighing eight tons charged a beleaguered U.S. beachhead—and were blasted to pieces by thirty-five-ton M4A2 Sherman tanks in a matter of minutes.

During the Cold War, Japan perceived a Soviet invasion from the north as its primary threat, and deployed beefier fifty-ton tanks like the Type 74 and Type 90 to a relatively static defense strategy. In the twenty-first century, however, Tokyo is more concerned it may clash with China on the small islands of its southern flank. While the uninhabited Senkaku Islands (called the Diaoyu by China) have caused the most heated disputes with China, Beijing-backed scholars have begun arguing that the Ryukyus island chain—which host over a million Japanese citizens and includes a major U.S. military base at Okinawa—is historically Chinese territory.

The JSDF decided to trade out much of its heavy armor for vehicles it can swiftly deploy to these widely dispersed islands, planning to cut down its MBT fleet from 740 to 300 vehicles (Japan currently operates 440 Type 90s and 11s.) But would the new light armor muster the firepower to deal more effectively with enemy tanks than the hapless Type 95s of World War II? Japan’s solution was to reach back for a concept dating back to World War II—tank destroyers.

In the early 1940s, the U.S. Army conceived of relatively fast vehicles equipped with tank-busting cannons to ambush enemy armor and provide fire support for the infantry—but which lacked the heavy armor to, say, lead a breakthrough into enemy territory. Despite vehicles like the M10 Wolverine being essentially less-well-armored tanks used primarily for infantry support rather than in massed units as envisioned, U.S. tank destroyers were surprisingly successful on the battlefield.

Japan’s twenty-first-century tank destroyer is the Type 16 Maneuver Combat Vehicle, an eight-wheeled armored car with a 105-millimeter gun situated in a three-man turret. The MCV has a crew of four and weighs twenty-eight tons—still twenty tons less than Japan’s compact Type 10 Main Battle Tanks. This is light enough to fit in Japan’s new Kawasaki short-takeoff-or-landing C-2 transport jets for rapid deployment to modest airfields on far-flung Japanese islands. However, critics point out that MCVs nearly max out the thirty-two-ton to thirty-seven-ton payload limit of the C-2 cargo jet, meaning a company of twelve Type 16s might require twenty C-2s (out of fifty to sixty planned for service) to lift once support personnel, fuel, ammunition and so forth are accounted for.

The MCV’s 105-millimeter gun has a fifty-two-caliber rifled barrel and is derived from the famous British L7 gun used on the Centurion and Leopard I tank. A human loader loads hefts either kinetic Type 93 Armor Piercing Fin-Discarding Sabot Rounds for maximum penetrating power, or dual-purpose Type 91 High-Explosive Anti-Tank rounds, which also work against soft targets. A 7.62-millimeter machine gun is mounted coaxially next to the cannon, while an M2 .50-caliber machinegun is perched on the turret for anti-aircraft defense.

The commander makes use of a panoramic sight to spot targets and engage the hunter-killer fire-control system adapted from the Type 10 tank, automatically slewing the gun to track the target. The gunner then makes adjustments peering through a night/day thermal sight.

The Type 16’s gun has a recoil-absorption mechanism that reduces the shock on the vehicle and stabilizes the gun on target for follow up shots. This is critical, because the U.S. Army’s twenty-one-ton M1128 Stryker Mobile Gun System, another eight-wheeler with a 105-millimeter gun, was so battered by the recoil of its main gun that its computers sometimes shut down.

The MCV’s wedge-shaped front and side use spaced armor—armored plates separated by an “empty” gap—and can mount modular armor, which could theoretically include explosive-reactive bricks or composite plates. The dimensions of the Type 16’s steel armor have not been publicized, although the frontal armor can reportedly withstand the twenty-millimeter or thirty-millimeter autocannons commonly found on other light armored vehicles, and possibly light infantry anti-tank weapons. The side armor more is modestly rated against heavy machine-gun rounds and heavy artillery splinters.

Two laser-warning receivers that alert the crew if they are painted by targeting lasers from the frontal arcs, giving them a chance to employ two four-cell smoke-grenade dischargers to obscure themselves. Critics have noted, however, that the vehicle lacks strong belly armor for protection against mines and IEDs, as the JSDF does not anticipate waging counter-insurgency warfare defending Japanese soil.

The MCV’s 540-horsepower liquid-cooled diesel engine can scoot it along at over sixty miles per hour, and its eight wheels each benefit from independent oil-hydraulic suspension for decent all-terrain mobility and gun recoil absorption. The Michelin tires can also be selectively inflated or deflated to conform with terrain. The controversial decision to eschew the all-terrain mobility of tracks was made due to much lower operating costs and superior speed while using road infrastructure.

Another issue is that even with modernized ammunition, the MCV’s 105-millimeter gun may struggle to penetrate the armor of heavier contemporary main battle tanks like the Chinese Type 99. However, lighter tanks are more likely to be deployed by adversaries in an island-invasion scenario.

Currently, there are roughly seventy MCVs serving in the Japanese Army’s 8th Division and 6th Brigade, with thirty more on order and a few hundred more possible. Type 16s have already been incorporated into the 15th and 42nd Rapid Reaction Regiments of the 14th Brigade and 8th Division respectively. These are light mechanized units incorporating organic heavy mortar and short-range air defense detachments designed to quickly relieve the southern islands. There are planned to equip at least two more newly rapid-reaction regiments in the 6th Division and 11th Brigade, as well as the 4th division’s reconnaissance battalion. And, most importantly, the MCVs have already seen action in the latest Godzilla movie!