Has Ukraine Exposed the Russian Military as a Paper Tiger? 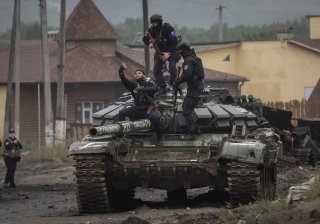 The Russian state-run TASS news agency quoted Vladimir Putin’s spokesman as saying that a military mobilization to achieve Russia’s goals in Ukraine is “not on the agenda.” What exactly does this mean?

Peskov’s comments raise several important questions, as Russian forces now occupy parts of Ukraine and are in some ways already “mobilized.” Perhaps the comments were part of a Kremlin effort to try to convince the world that is holding back large amounts of its military power and could be much more threatening and lethal than it has been thus far. A quick look at Global Firepower’s latest data shows that Russia may indeed have thousands of tanks and armored vehicles in its arsenal. Yet how many of them are now operational? Russia reportedly has 12,000 tanks, but hundreds, if not thousands, may not be operational, and many of those that are could be extremely dated Cold-War era T-72 tanks that have not been sufficiently maintained or upgraded.

Also, by any observer's estimation, Russia has already launched a large-scale invasion of Ukraine, with thousands of soldiers and weapons systems already being used on the battlefield. Russian forces were recently repelled by Ukrainian defenders, however, and although the initial incursion into Kyiv was large in scope and scale, it was ultimately unsuccessful.

It seems possible that Russia’s comments on mobilization could be something of a bluff, meaning that Russia simply may not have the capabilities to deploy more ground attack forces at scale. In fact, much of Russia’s military power was committed to Ukraine months ago. And the systems that remain in reserves—often outdated or poorly maintained—may not be ready for use. So, while Russia may want Ukraine and the West to think it still has a highly lethal force in the waiting, its combat performance thus far and questionable weapons reserves suggest that it may not. If Russia still operated a large number of combat-ready and modernized tanks and armored vehicles, wouldn’t they be being used right now to stop Ukraine’s successful counteroffensive?

All of these factors point to a massive inconsistency. While Russia may have large amounts of Cold War hardware lying around, the Russian military’s performance in Ukraine indicates that its true capabilities may only be a fraction of what most of the world previously envisioned.