Have Liberal Values Fallen Victim to Russia’s War on Ukraine? 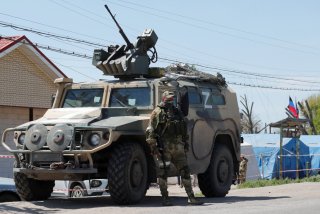 The Russo-Ukrainian War is part of a cosmic showdown between autocracy and liberal democracy—at least, according to President Joe Biden. Yet, the Western response to Russia’s invasion is eroding liberal values across the democratic world, including in America. Those eroding values include the freedoms of information and expression, the principle of non-discrimination, economic openness, and the belief that diplomatic compromise can secure global peace.

In April, the White House introduced the Orwellian-sounding Disinformation Governance Board to combat Russian propaganda. This is concerning since government officials have labeled legitimate news stories, such as the Hunter Biden laptop scandal, as Russian disinformation. “Instead of installing a Truth Politburo at DHS, the government should leave the job of policing disinformation to the competitive organs of the press,” writes Jack Shafer of Politico.

As a result, some press organizations are being censored. The European Union banned Russian outlets RT and Sputnik, and YouTube blocked access to their channels globally. PayPal suspended the accounts of independent outlets propounding alternative views on the war in Ukraine, threatening to keep their money as “damages.”

My country of residence, the Czech Republic, has been prosecuting public expressions of support for Russia’s invasion; the maximum penalty is three years in prison. The public prosecutor’s office told me that nine people have already been prosecuted and sixty-nine cases “are in [the] initial stage of verification,” although “the number is changing every day.” In neighboring Slovakia, supporting the invasion could land you twenty-five years in prison.

Across the West, the principle of non-discrimination has also suffered since Russia’s invasion. For example, the Munich Philharmonic Orchestra fired its star Russian conductor for his failure to condemn the invasion. Similarly, the Montreal Symphony Orchestra dropped from its schedule a twenty-year-old Russian pianist who had condemned it. In the sporting world, Russians and Belarusians were banned from competing in the Boston Marathon, and they will be barred from Wimbledon as well. The Kennel Club even banned Russian dogs from its annual Crufts exhibition.

Elected officials are not immune to discriminatory Russophobia. Congressman Eric Swalwell, a liberal Democrat, once co-sponsored the National Origin-Based Antidiscrimination for Nonimmigrants (NO BAN) Act. He now supports “kicking every Russian student out of the United States.”

Liberals believe that economic openness is key to global prosperity. But since Putin’s invasion, the U.S.-led West has imposed unprecedented sanctions that pose serious global economic risks. The consequences of these sanctions are not limited to Russians—and certainly not to Russia’s political elite. Indeed, the second-order effects will immiserate working people everywhere, even as Russia’s economy so far has proved surprisingly resilient.

In particular, cutting Russia off from the global financial system could upend the world economy by sending a clear message to America’s adversaries: withdraw from common payment systems and regulatory frameworks or risk humiliating economic coercion.

The UN Charter, a product of liberal optimism, requires that parties to any dispute “first of all” seek a diplomatic solution. But before Russia’s invasion, Washington refused to engage Moscow in serious diplomacy. As a result, many Western governments are hindering peace negotiations, preferring to “see Russia weakened” than to stop the bloodshed (although Biden’s recent op-ed in the New York Times suggests that is no longer an American goal).

Fortunately, the same values the West has lately undermined may yet guide it out of the present crisis and safeguard a bright future for liberal self-government. Russian president Vladimir Putin portrays the West as being at war with all Russians. Targeting sanctions more smartly against Russian political elites and ceasing discrimination against Russian nationals will rob him of this popularity-boosting talking point.

The United States cannot stand for liberal democracy while also suppressing freedom of information, which President John F. Kennedy believed was a “fundamental human right.” Addressing the related freedom of expression, the Universal Declaration of Human Rights proclaims that everyone has the right “to seek, receive and impart information and ideas through any media and regardless of frontiers.” Protecting these rights would set an example for illiberal states and ensure that America does not set the stage for its own techno-tyrannical future.

The United States should live up to its international duties by seeking a diplomatic resolution to the Russo-Ukrainian War. Mission creep has brought the United States ever closer to direct war against Russia. Washington should instead work with Western allies to broker a settlement that not only ends the war but also creates a lasting European security architecture that includes Russia, as New America Foundation CEO Anne-Marie Slaughter has called for.

Finally, at the level of grand strategy, the White House should revise its Manichean vision of a world divided between autocracies and liberal democracies. The effort to vanquish autocracies all over the world is putting in jeopardy those liberal values the United States claims to be fighting for.

Andrew Day is a Foreign Policy Researcher for the Nonzero Foundation. He has a PhD in political science from Northwestern University and currently lives in Prague.