Hawaii Gets Its First B-2 Stealth Bombers 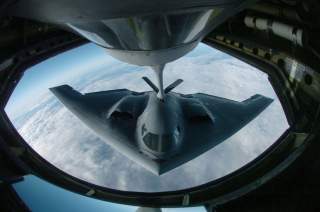 “The training with the Hawaii Air National Guard was invaluable,” Adcock said. “Together we refined and exercised multiple tactics that are crucial to the Indo-Pacific Command area of responsibility.”

The bombers were there from Aug. 15 through Sep. 27, and the pilots accomplished hundreds of local and long-duration sorties and regional training. And weapons crew also practice loading BDU-50s on the flightline.

“The B-2 Spirits’ first deployment to (Joint Base Pearl Harbor-Hickam) highlights its strategic flexibility to project power from anywhere in the world,” said Maj. Gen. Stephen Williams, director of air and cyberspace operations, Headquarters Pacific Air Forces. “The B-2s conducted routine air operations and integrated capabilities with key regional partners, which helped ensure a free and open Indo-Pacific. The U.S. routinely and visibly demonstrates commitment to our allies and partners through global employment and integration of our military forces.”

One of the key integrations involved the B-2s and F-22 Raptors assigned to the 199th Fighter Squadron, a unit of the 154th Wing under the Hawaii Air National Guard. Like the B-2, the F-22 is virtually invisible to threats. This makes them the perfect match for escorting the stealth bomber and providing situational awareness. The training helped polish the cohesion between the pilots.

“The Bomber Task Force is a total-force integration deployment,” said Lt. Col. Nicholas Adcock, Air Force Global Strike 393rd Bomber Squadron commander. “Our active-duty and guard members worked seamlessly together with their counterparts here in Hawaii to determine the best way for the B-2 to operate from this location in the future.”

The 154th Wing also supported the B-2 with the 203rd Air Refueling Squadron’s KC-135 Stratotankers. Although the B-2 is capable of flying approximately 6,000 miles without refueling, the KC-135s provided aerial refueling for long-duration missions.

“The training with the Hawaii Air National Guard was invaluable,” Adcock said. “Together we refined and exercised multiple tactics that are crucial to the Indo-Pacific Command area of responsibility.”

In addition to air operations, the deployment also focused on hot-pit refueling. During this technique, the pilots land and continue to run the B-2’s engines while fuels distribution technicians refuel the aircraft. The pilots are immediately able to take off again with a full tank and maximize the amount of time they are in the air versus on the ground. One B-2 conducted hot-pit refueling at Wake Island, a coral limestone atoll in the mid-Pacific, west of Honolulu, Sep. 14.