He Won't Be Smiling: How Federal Judges Could Be Donald Trump's Worst Nightmare 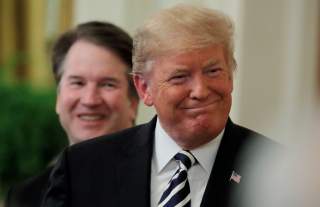 Editor’s note: President Donald Trump has mounted attacks on the Justice Department and its various branches, on prosecutions he’s interested in and the judges presiding over those cases. He’s complained that his political adversaries – Hillary Clinton and James Comey – should have been prosecuted and that his friends and associates, like Roger Stone and Paul Manafort, shouldn’t have been.

The president’s complaints extended to a recent harangue against a juror in the Stone case, prompting a courtroom rebuke by federal Judge Amy Berman Jackson who said, “Any attempt to invade the privacy of the jurors or to harass or intimidate them is completely antithetical to our entire system of justice.”

If the attacks are meant to intimidate, there’s one class of employees in the U.S. justice system who are immune to them: federal judges, who have lifetime tenure. We asked political science professor Amy Steigerwalt to explain the history and logic behind the lifetime appointment of federal judges.

1. What is life tenure for federal judges?

The vast majority of United States federal judges are nominated by the president and confirmed by the Senate, as I describe in my book, “Battle Over the Bench: Senators, Interest Groups and Lower Court Confirmations.”

These judges, known as “Article III” judges for the part of the Constitution that establishes their role, “hold their offices during good behaviour,” which in modern parlance means they serve for life. (The exceptions are federal bankruptcy and magistrate judges who serve for set terms and handle a limited set of issues).

The result is most federal judges serve until they voluntarily retire, die or, in extremely rare cases, are involuntarily removed through impeachment.

2. Why do federal judges have life tenure?

In England, the king appointed judges and could remove them at will, so judges had strong incentives to issue rulings that pleased the king to keep their jobs.

The Framers of the Constitution instead wanted an independent judiciary able to act as a buffer against an oppressive legislature or executive. As Alexander Hamilton argued in Federalist 78, the Framers granted federal judges life tenure to protect them from undue political influence: “In a monarchy it is an excellent barrier to the despotism of the prince; in a republic it is a no less excellent barrier to the encroachments and oppressions of the representative body.”

Life tenure is intended to allow judges to issue rulings that go against the majority or ruling elite without fear of retribution. And these protections are necessary: Federal judges routinely rule on the most important and controversial issues of the day and consider whether state and federal laws are constitutional, raising claims of “countermajoritarian” behavior by scholars and politicians alike.

Public criticism of judicial decisions is also nothing new: Newly inaugurated President Thomas Jefferson vehemently derided the 1803 case Marbury v. Madison, perhaps the most consequential Supreme Court decision, which ultimately established the power of judicial review, or the ability of courts to strike down laws as unconstitutional. Jefferson even tried to block the court from ruling on the case by canceling the court’s June 1802 term.

President Barack Obama famously criticized the justices of the Supreme Court for their ruling in Citizens United v. FEC while they sat silently at the 2010 State of the Union.

Present Trump has more recently criticized various federal judges for their rulings in cases addressing the travel bans, during the trials of people associated with his administration and 2016 presidential campaign, and just recently suggested Justices Sonia Sotomayor and Ruth Bader Ginsburg should recuse themselves from any cases dealing with the Trump administration.

Concerns have been raised about Trump’s comments criticizing federal judges, including by Chief Justice John Roberts, who said there are no “Obama judges or Trump judges.”

Life tenure, however, means that the targets of these attacks need not fear losing their seats on the bench.

3. What are the pros and cons of this system?

Life tenure allows judges to make hard and potentially unpopular decisions without fear of retribution. In all of the examples mentioned above, the judges faced nothing more than public criticism.

Judges without life tenure, alternatively, face the possibility of losing their jobs. Many states have chosen to implement some type of electoral system to increase accountability for judges sitting on state courts. Elected state judges must therefore make their constituents happy to ensure reelection.

Studies have found, for example, that elected state judges are more likely to rule harshly in criminal cases as elections approach to stave off criticisms of being “soft on crime.” Other studies find elected state judges change their sentencing behavior to match constituent preferences, and that elections may lead to increased disagreement on the courts.

Life tenure shields federal judges, however, from being accountable for their actions. Impeachment is the only remedy, even for blatantly discriminatory or even illegal behavior. But, systems that increase judicial accountability raise concerns about what forces may be influencing a judge’s decisions, whether that is public pressures, campaign donors or political elites.

Another potential issue with life tenure is age. Life expectancy has increased exponentially and there is no mechanism other than impeachment to remove someone involuntarily who is showing signs of impaired judgment or decline in mental cognition.

4. Is this system likely to change?

Probably not. While states have experimented with a large variety of judicial selection and retention systems, efforts to reform the federal life tenure system remain largely in the arena of academic law school debates.

The proposed reforms generally modify life tenure around the edges, rather than doing away with it altogether. One of the most widely supported proposals concerns a mandatory retirement age. Others propose term lengths.

The foremost barrier is that changing the system requires an amendment to the Constitution, which requires a constitutional amendment be proposed by a two-thirds vote of each chamber of Congress and then ratified by three-quarters of the states. In this highly polarized time, that’s unlikely to happen.

What is more possible are legislative attempts to make retirement more attractive to sitting judges, such as the current “Rule of 80”, established in 1984, which encourages retirement or partial retirement while still allowing judges to draw their full pay.

But, overall, independence is a defining virtue of the American federal judiciary, one that has been mirrored by countries around the world.