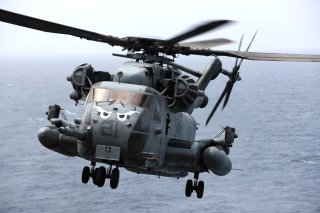 “This was the first time a Marine Corps JLTV was moved from shore to ship by air, highlighting the capabilities of both platforms and allowing the 31st MEU a new opportunity to implement Expeditionary Advanced Base Operation (EABO) concepts,” the Marine Corps explained in a statement.

The JLTV is the U.S. Army and Marine Corps’ Humvee-replacement vehicle, designed for better mobility and a higher level of protection than its predecessor.

“This helicopter external lift operation was initiated with the CH-53E lifting the JLTV from a beach within a secured military training area in Okinawa, Japan and proceeded entirely over water to the USS Miguel Keith,” the Marine Corps explained in its statement.

“The CH-53E proceeded back to the pick-up location, with the load, after conducting multiple lifts aboard the USS Miguel Keith; simulating the establishment of an expeditionary advanced base from naval amphibious shipping.”

The flexibility that ship-to-shore delivery by air that the Marine Corps’ heavy-lift fleet of helicopters offer fits squarely within the Marine’s Force Design 2030 plan. Under the plan, the Corps is implementing some of the greatest structural changes of the last thirty years.

As part of that change, the Corps has divested all tank battalions as well as most tube mortars and artillery, as those systems would be significantly less useful in a littoral environment than on land. Weight constraints have played a role too;  the United States M1 Abrams main battle tank is the heaviest modern battle tank and would be difficult to bring from ship to shore.

Force Design 2030 prioritizes flexibility in the littoral maritime domain,  and delivering JLTVs to Marines on shore, potentially in contested areas, could prove to be a powerful asset.

“This training evolution was a crucial step in further integrating subordinate elements of the 31st MEU and providing a path for developing future EABO capabilities with similar platforms,” the Marine Corps statement reads. “The crew that executed this event previously conducted several prior JLTV lifts to maximize their readiness, proficiency and safety.”