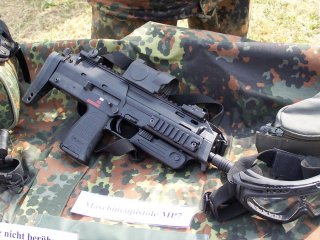 One of the most iconic submachine guns is the German-made Heckler & Koch MP5, and it is used by military forces, paramilitary and police units around the world. While it is regarded to be an excellent weapon, special operators found its 9mm cartridge to lack the hitting power to defeat body armor. In 1989 NATO published a set of requirements that called for not only a new firearm but a new weapon to fire it.

Enter the H&K MP7 (Mashinenpistole 7), a personal defense weapon (PDW), which is chambered for the heavy-hitting HK 4.6x30mm armor-piercing cartridge. It took a decade for the weapon to be refined, and production began in 2000. This new weapon is both compact and light thanks to the use of polymers in its construction, yet it packs a serious punch – the new cartridge can penetrate a NATO CRISAT (Collaborative Research in Small Arms Technology) Target, which is made up of 1.6mm of titanium and 20 layers of Kevlar, at 200 meters.

The steel core 4.6x30mm round, which is currently exclusive to the MP7, was developed to be lightweight like a pistol round, yet still deliver the penetration of a rifle cartridge. Thus the MP7 bridges the gap between assault rifles and conventional submachine guns. It has a short 7.1-inch barrel and weighs just 4.1-pounds. Instead of a blowback system that is traditionally seen on submachine guns, including the MP5, the MP& utilizes a gas-operated short-stroke piston that is similar to the larger HK415 rifle. This allows the MP7 to deliver 950 rounds per minute.

Magazines are fitted into the pistol grip—like the Israeli Uzi—and the MP7 is unique in that it offers an ambidextrous fire selector, bolt catch lever and magazine release.

The weapon was widely adopted by military and police units following the events of 9/11, and it has become favored by members of SEAL Team 6. It has been reported that some of the operators carried the weapon during the 2011 mission that killed Osama Bin Laden in Pakistan.

The MP7 is just the latest of a long line of impressive small arms to be developed by H&K, which was founded in the ashes of World War II and is considered a major part of the Wirtschaftswunder or "economic miracle" that saw the rapid reconstruction and development of the economy of West Germany. When H&K was founded in 1949 it manufactured machine tools, bicycles and sewing machines but no firearms.

In 1956 the company responded to the West German government's calls for a new firearm for the Bundeswehr (German Federal Army) and offered the G3 battle rifle. That contract allowed the firm to transform into one of the most successful military small arms suppliers in the world. In 1969 it introduced the MP5 submachine gun—a firearm that truly evokes the company motto: "KeineKompromisse!" (No Compromises!).