Here’s How Ukraine Sent Russian Armor to the Graveyard 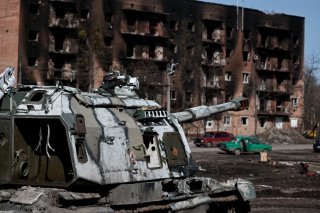 Ukrainian president Volodymyr Zelenskyy is well known for his passion, fervor, intensity and ability to unite and inspire Ukrainians by directly and openly defying Russian invaders from the capital of Kyiv. This pure “spirit” is in large measure responsible for Ukraine’s unexpected success, yet Ukraine’s ability to stop, repel, and even destroy attacking Russian forces could not be happening without substantial tactical proficiency.

“...[D]espite being outgunned and outmanned, the Ukrainians have demonstrated superior tactical proficiency and they’ve demonstrated a superior will to fight, fight for their own country, fight for their freedom,” Chairman of the Joint Chiefs of Staff Gen. Mark Milley told an audience at the recent meeting of the Ukraine Defense Contact Group at Ramstein Air Force Base, Germany.

Basic love of self, country, countrymen, and children are certainly undeniable motivating forces, as is a simple need to unify against a common enemy to defend the homeland. Yet passion alone could not kill or stop the Russian invaders, as Ukraine has used U.S. and NATO-provided weaponry and innovative warfare tactics to achieve unexpected success.

In a tactical sense, Ukrainian success can be explained by the concept of “decentralization.” Ukrainians have applied this idea of decentralized command and control to great effect in several key respects. Ukraine’s use of anti-armor weapons is perhaps the most visible element of this, as dispersed groups of dismounted fighters showed an ability to stage ambushes and hit and run attacks upon incoming mechanized Russian forces by disaggregating and striking at different angles from hidden positions with shoulder-fired anti-tank weapons. By not needing to “mass” in large formations or have every movement orchestrated from one central command hub, Ukrainian fighters were able to leverage an element of surprise while making themselves smaller and much less vulnerable targets for Russian attackers.

With these factors in mind, a former high-level leader within the intelligence community explained that a leader’s ability to inspire is only as effective to the extent that it is matched by tactical competence and practical leadership ability. The most important leadership quality needed amid combat and incoming hostile fire is competence, says Mike Mears, former director of human capital at CIA, told The National Interest in an interview.

“There was an interesting study at West Point some time ago that said, when you’re in combat all of those attributes or needs, leadership, strengths, drop, and suddenly another one comes up to be number one, and that is competence. And the reason is: if you’re caught in a firefight, what you hope more than anything is that your Sergeant knows what to do and how to do it. You don’t care so much about all this other stuff. And that’s the only exception in leadership, I think, in which you get this during life-threatening situations, you get this little reversal,” Mears explained.

Along these lines, yet another aspect of Ukraine’s effective use of a “decentralized” strategy can be seen in the communications realm. There has not appeared to be any kind of functional command and control “hub,” center, or location from which tactical decisions are coordinated. Instead, those at the tip of the spear are empowered to make fast decisions within a broader leadership framework or structure. Having multiple, dispersed radio “nodes” is a critical element of a “decentralized” strategy as it makes communication much more survivable and sustainable when facing a major threat. Smaller “nodes” or individual radio locations spread apart create smaller, less detectable signals likely to be found or attacked by Russian forces. The smaller the radio or electronic device, the less detectable the emitting signal or signature for enemies to track and jam. This decentralized command and control strategy may be one key reason why there are little to no reports of Russia using electronic warfare systems to great effect, something it was widely known to be capable of during its previous incursion into Ukraine in 2014.

“Look back at Zelenskyy, he had about 26 percent approval rating on February 23, or shortly before the invasion. And I think there was a recent survey that showed him with a 91 percent approval rating. He has shown himself that he’s not a comedian. This guy is a highly competent manager, administrator, and leader. The competence that he’s showing, is extraordinarily reassuring to the Ukrainian people,” Mears said.