Here’s the Iranian Ship that Sank One of its Own 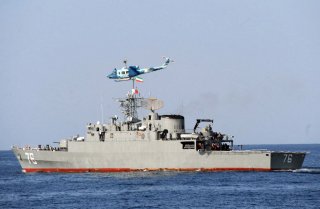 The friendly fire incident in the Strait of Hormuz earlier this month pitted an Iranian Moudge-class frigate, the Jamaran, against a support ship. Unlike much of Iran’s military hardware which is heavily dependent on foreign parts and designs, the Moudge-class is domestically manufactured and has some relatively modern capabilities. Iranian media called the Moudge-class a “major technological leap for Iran's naval industries,” though the class has experienced problems before.

In 2018, pictures and video surfaced that appeared to show the second of the class, the Damavand, grounded on a sea wall to Iran’s north in the Caspian Sea. Photos seemed to show the Damavand split in half due to the grounding, and may have sunk, possibly suffering irreparable damage.

Additionally, the class is equipped with a smaller 40 millimeter gun for closer in defense against aircraft and missiles, and has several crew-served 20-millimeter guns for smaller land or sea targets. In addition to anti-surface weapons, the Moudge-class is also capable of hunting submarines and has a small helicopter flight deck that can service medium-sized helicopters.

Perhaps the Moudge-class’ most formidable armament, and likely the same weapon used in this month’s friendly-fire incident, is the Noor anti-ship missile. The Noor is likely a copy of a very similar Chinese anti-ship missile, the YJ-83. The Noor has a very low trajectory and is designed to fly just above the ocean surface to avoid detection by radar. It has steadily been upgraded, and has a range of 30 kilometers for initial copies, and up to 300 kilometers for later variants.

Reports covering the friendly-fire incident in the Gulf of Oman indicate that nineteen Iranian Navy personnel were killed and an additional fifteen injured. Video after the incident showed a heavily damaged vessel being town back to port while it was still smoldering. The boat, an Iranian support vessel called Konarak, seemed to have been hit amidships and was visibly twisted and listing to one side.

The Konarak had reportedly been towing targets for a live-fire exercise that the Jamaran and possibly other vessels were conducting. It remains unclear if the Konarak was hit due to a missile targeting mistake, or human error.

The friendly fire incident this month comes at an inopportune time for Iran. Tension between Iran and the United States is still high despite the cool caused by the coronavirus pandemic, which has struck Iran particularly hard.

This latest military mishap also comes mere months after Iran accidentally shot down a Ukrainian airliner that Iranian air defense operators mistook for an American military aircraft. It would appear that the Iranian Navy may need to do a bit more training.