Here’s What the U.S. Army Wants From Its Next Generation Combat Vehicle 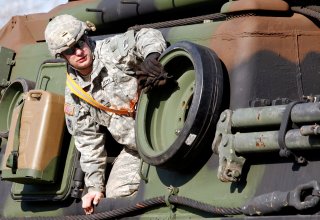 A decided emphasis for the U.S. Army’s family of Next-Generation Combat Vehicles (NGCV) is speed, maneuverability and expeditionary warfare. These are all key components of the service’s effort to bring supportive fires to advancing infantry, help units cross bridges, and engage in mechanized maneuver warfare. This vision will also require leveraging a new generation of sensor technology and drone coordination.

The NGCV effort consists of an interesting mixture of new platforms, including the fast-emerging Optionally Manned Fighting Vehicle infantry carrier, Robotic Combat Vehicle and some kind of future tank-like platform.

Part of the strategy for engineering lighter-weight vehicles resides in a specific effort to use new sensor systems, active protection and speed itself as survivability-enhancing mechanisms. The concept is to see and elude or thwart incoming enemy fire before being hit. In effect, the Army wants to be able to see and destroy enemies before their own units are hit.

The strategy is to use long-range AI-enabled targeting sensors and thermal sights, air and ground drone connectivity, short-range air defense and active protection systems. This variety of systems would replace the traditional reliance on very heavy armor engaging in massive mechanized force-on-force warfare.

However, the Army plans for a new fleet of armored combat vehicles, at least so far, does not envision anything heavier than thirty-to-fifty tons maximum. For reference, the venerable Abrams tank weighs in at seventy-tons.

The Abrams brings unparalleled survivability, but it lacks the speed to keep up with advancing infantry and lighter-weight vehicles. Furthermore, they suffer from distinct mobility problems. For example, tanks simply cannot get to a lot of places as they are too heavy for many bridges.

Given all this, when it comes to survivability in terms of being prepared to “take a hit” if necessary, will the Army’s new fleet of future vehicles truly be prepared? Certainly, boxers train to keep fighting when they take punches, knowing that will likely happen.

Much of the Army’s long-range future strategy hinges upon the emergence of lightweight armor composites, most of which may not yet be ready to offer protection that is superior to heavy armor. Army weapons developers have said that some kind of “breakthrough” survivability technology may be needed before the service can truly engineer a next-generation “tank.”

If lightweight armor strong enough to hold off tank rounds and certain kinds of Anti-Tank Guided Missiles is not yet here, future armored Army vehicles will need to rely upon sensors, active protection and maneuverability to survive. Is that enough?

Could the Army’s new fleet encounter some of the same limitations thought to have imperiled other Future Combat Systems? After all, years ago it was determined that FCS’ new fleet of eight twenty-seven-ton Manned Ground Vehicles simply were not survivable enough for heavy mechanized, major power war.

The technical and developmental premise of FCS was to rely upon a sensor-driven “survivability onion” able to see and destroy threats without having to sustain a direct hit. Such a strategy, which may now inform the Army’s NGCV approach, may be an error based on faulty reasoning.

Would you feel prepared for a fight if you based your entire approach upon the expectation that you will not have to take a hit? What if sensors are jammed or malfunction? What if certain kinds of enemy munitions are able to penetrate your active defenses?

Should an armored combat vehicle, ready to engage in major power mechanized warfare, be engineered such that it has the best chance of surviving and continuing to fight in the event that it is hit by a tank round? What about other weapons?

Certainly, Army weapons developers, strategists and technology experts have learned lessons from FCS, which is why the service aims to connect the best of both worlds with its new fleet of NGCVs.

This means that the seemingly impossible may be possible. Perhaps the Army can build future armored combat vehicles that are both more maneuverable and deployable while, at the same time, bringing new levels of unprecedented survivability to armored warfare? It just might be possible, if seemingly paradoxical.

One such strategic effort to circumvent this predicament might be found with robotics and manned-unmanned teaming. If unmanned vehicles were operated by humans at safer stand-off ranges, they could absorb incoming enemy fire, engage heavily armored vehicles and test enemy defenses, lessening the need for manned armored vehicles to enter into higher concentrations of enemy fire in closer proximity.

Nonetheless, the bottom line may be this: heavy armor has an irreplaceable value in future war. The tank may be here to stay, at least for the immediate future.