Here Is the Army's Hyper-Networked Vision of Future War 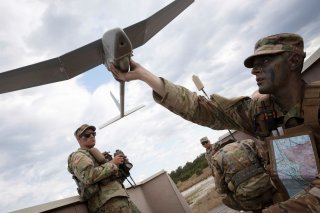 An aerial drone finds an enemy target buried beneath a ridge maneuvering to attack, and passes the specifics to a small column of forward operating reconnaissance and weapons-robots. These robots then traverse the rugged terrain, maneuver through hostile territory and get in position for counterattack. Soldiers, operating in the role of command and control, receive navigational and targeting data from “networked” robots and forward intelligence for approaching manned and unmanned armored vehicles and air attack platforms. Armed and informed, the force can immediately fire upon the enemy units and fortifications before an adversary gets into position to attack.

These kind of robot-to-robot linkages represent a new phase of research, experimentation and autonomy for the Army, which continues to explore options for future war. The initiative involves extensive collaboration between the Army, industry innovators and academic institutions such as The University of Texas and Carnegie Mellon University. The University of Texas, located in Austin near the headquarters of Army Futures Command, made a $50million investment to build a new robotics laboratory

“At CMU (Carnegie Mellon University) they are working on algorithms to link ground and air vehicles...and it becomes not manned-unmanned teaming, but ‘unmanned-unmanned’ teaming. We are collecting data to train our algorithms,” Gen. John Murray, Commanding General, Army Futures Command, told me in an interview for The National Interest.

The concept is to engineer a new Combined Arms paradigm which massively increases “linkages,” or a new generation of warzone command and control with an accelerated decision loop for commanders.

This, Murray explained, could precisely perform the sought-after robot-to-robot connectivity and, as he put it, “go to a grid square and identify a threat from a ground and air perspective. What is the greatest value from a reconnaissance standpoint or weapons standpoint is to make sure we have secure linkages,” Murray said.

There are already many linkages between human operators and unmanned systems—ground robots and aerial drones can send back data, images and video feeds to command and control centers. Helicopter pilot crews can already control nearby drones from the air. The next iteration for these kinds of applications, is to extend the range, functionality, mission scope for robots and, perhaps most of all, harden the networks. Secure robot-to-robot networks represent what could be called an unprecedented advantage when it comes to future war, yet extended connectivity can also make communications more vulnerable in some instances. However, the overwhelming combat advantage can be successfully sustained if networks are encrypted, hardened and integrated with a wide range of data assurance and protection technologies. With this in mind, the Army acquisition community is now making a decided effort to build cyber resiliency into weapons platforms much earlier in the developmental process, such as during early prototyping. This includes an elaborate process of anticipating the kinds of attacks various platforms and networks are likely to face in the future, and build-in protections on the front end to prevent having to impose or integrate new applications in the future, which might not weave into the system as easily or effectively.