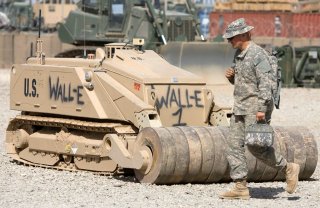 Later this year, the service plans to conduct a “soldier touch point” exercise at Fort Carson, Colo., wherein unmanned vehicles perform a range of combat missions in tandem with manned crews containing human operators. The exercise, which has been slightly delayed due to the coronavirus pandemic, seeks to replicate various key aspects of future war.

The Army seeks a light, medium and heavy fleet of Robotic Combat Vehicles as part of an emerging program to support infantry and armored units on the move.

“The mediums are probably about 10-tons or so and that is what we were going to do some experimentation with at Fort Carson. We have not yet done experimentation with what we call heavy class... 20 to 30-ton class vehicle,” Gen. John Murray, Commanding General of Army Futures Command, told me in an interview.

The exercise will explore various combat tactics, maneuvers and scenarios as part of the Army effort to fast-track the technology. The concept is clear—enable human soldier decision makers operating in a command and control capacity to receive organized, fused and integrated combat data in real time from robots. Unmanned vehicles could carry ammunition, cross bridges into enemy fire, perform forward recon missions to test enemy defenses, coordinate with air attack assets and—when directed by human authorities—destroy enemy targets with mounted weapons. Not only will these kinds of technical steps expand attack options and combat lethality while better protecting soldiers from enemy fire, but they will further disperse or disaggregate advancing forces, bringing additional tactical advantages. The robots could also support dismounted infantry in some cases by traversing rigorous terrain and bringing armored support to advancing ground units.

Murray explained that “networking” manned and unmanned nodes is a key part of the technical and strategic effort.

“You can imagine that the higher up you go in weight, the more you can put on it. We are looking at algorithms that enable them to cross terrain. So we have spent a lot of time looking at the secure link between the robotic vehicle and the soldier in the vehicle itself,” Murray said.

The Army’s fast moving Robotic Combat Vehicle program, a key element of its Next-Generation Combat Vehicle (NGCV) program intended to provide the service with a new generation of armored warfare ground vehicles. The robots are being engineered to operate in tandem with the now-developing OMFV Optionally Manned Fighting Vehicle (Bradley replacement) effort.

“We’ve been using light robots in Iraq and Afghanistan for the better part of a decade plus in terms of our EOD guys with roadside bombs and vehicle-born bombs. We have moved onto medium robotic vehicles,” Murray said.

The Army intends this to be the cutting edge of manned-unmanned teaming, human-machine interface coordinating human decision-makers with robots increasingly able to perform autonomous functions. The Army doctrinal parameters are significant here because the technological ability of a robot to surveil, track, target and destroy a target without human intervention—is basically here. However, for ethical and tactical reasons, DoD maintains its clear position that humans must make decisions regarding the use of lethal force, despite advances in algorithms enabling greater autonomy. The doctrinal stance is also grounded in a recognition that even the most advanced computer algorithms are not sufficient to replace the problem-solving, decision-making abilities of human cognition. There is concern, however, that potential adversaries will not adhere to similar doctrine.

“I think robotics will fundamentally change the way we fight in the future. Experimentation is just as important as the technology is understanding what this will do in terms of what formations will look like in the future and how they will be employed,” Murray said.