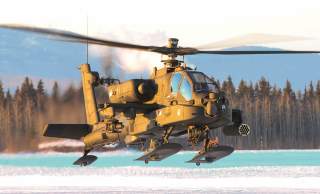 Since 1939, aerospace manufacturers Boeing and Sikorsky Aircraft have remained synonymous with dependable fixed-wing aircraft and helicopters, respectively, responsible for supplying the US armed forces with illustrious vehicles from the venerable F/A-18 Super Hornet and Air Force One to the combat-ready Black Hawk and Chinook helos. Now, the two firms are teaming up to develop a brand new gunship for the US military: The SB-1 assault helicopter.

Developed as part of the Future Vertical Lift (FVL) program under the Office of the Under Secretary of Defense for Acquisition, Technology and Logistics, The War Zone reports that the Army is currently exploring replacement craft for both the AH-64 Apache gunship and UH-60 Black Hawk. Here’s the backstory on the project, courtesy of The War Zone:

In 2015, Sikorsky and Boeing first announced they were teaming up to build a rotorcraft for the Joint Multi-Role Technology Demonstration (JMR-TD). This project is supposed to serve as a lead in effort for the larger, long-term FVL plan. This partnership led to the SB-1 Defiant, the unusual nomenclature standing for “Sikorsky and Boeing are greater than one.” A compound helicopter with a push-propeller and co-axial, rigid rotors, the firms boasted this new aircraft would be significantly faster than traditional helicopters, more maneuverable, more stable while hovering, and quieter.

Sure, you can’t really get a sense of those improvements in action from Lockheed Martin’s concept art, but the animation is enough to heighten any mechanophile’s anticipation. The promotional video states that the copter will boast a cruising speed of 280 miles per hour, far outstripping the attack helos currently utilized by both the Army and Marine Corps. The craft is reportedly meant to maintain altitude and stability even under “hot-and-high” conditions, hovering more than a mile above the ground in temperatures up to 95 degrees Fahrenheit.

Oh, and let’s not forget the guns, per The War Zone:

The proposal has a chin-turret with an automatic cannon that looks very much like the three-barrel, 20mm M197 gun on the Marine Corps’ AH-1s. As with both the AH-1 and AH-64 series, there are two stubby wings with four external stores pylons for various ordnance and two launch rails on the tips for air-to-air missiles – in this case the artist appears to have mounted AIM-9X Sidewinders – are on either side of the fuselage. In one of the frames, it appears that two of those racks may actually attach directly the chopper’s main body.

While the Army hopes to conduct flight tests of the SB-1 attack prototype by the end of 2017, that’s contingent on whether the collaboration between the two aerospace giants actually makes it, er, off the ground.

The last joint project undertaken by the two was the RAH-66 Comanche five-bladed attack helicopter, commissioned in 1991, built in 1996, and aborted in 2004… at a cost to the DoD of nearly $7 billion. With other certain aircraft aggressively over-budget, it’s doubtful the Pentagon will have the patience to sink time and money into another dud.