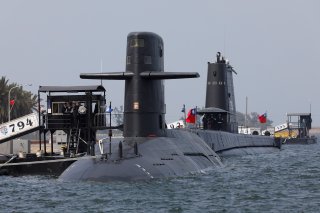 Facing an increasingly powerful and aggressive China, Taiwan has placed a high priority on acquiring modern submarines for its Navy. Stymied in its efforts to purchase foreign-built submarines and lacking domestic submarine construction experience, Taipei sought outside expertise to assist its submarine construction program. On October 1, it took its first major step in that process, signing a $1.6 billion contract with Gavrno Limited to supervise the design of the Taiwanese Navy’s indigenous defense submarines (IDS). Gavron was chosen from among seven competitors based on its technical expertise, capitalization and possession of the required export permits. The design options are expected to be presented by March 2019. A Taiwanese shipyard will initiate construction once a design is chosen with Gaven Limited providing oversight and supervision of key aspects of the construction until the domestic shipyards have gained sufficient experience to go forward on their own.

What remains to be seen is if Taiwan will take an incremental approach of starting with a comparatively small prototype and scaling up the design for its operational units or taking the riskier path of beginning with a full-scale operational submarine. In either case, the more important question will be the submarine force’s size and capabilities. Given the proximity of the threat, 1,200 plus ton ocean-going submarines may not be necessary. A a mix of 600 to 800 ton manned submarines and smaller unmanned underwater vehicles (UUVs) may provide the required deterrent to Chinese naval aggression and amphibious assault. Submarines remain the ultimate stealth weapons platform that no naval commander can afford to ignore.

The challenge for Taiwan is to avoid some of the construction and development problems that have plagued other countries that attempted to build submarines domestically for the first time. For example, Australia’s indigenous Collins-class submarines have suffered technical faults and problems throughout their service lives, problems complicated by the Royal Australian Navy’s personnel shortfalls. Starting with a small prototype offers a slower but less risky path to learning key construction lessons. For example, the Iranian Islamic Navy reportedly will commission its first domestically produced full-sized submarine by March, 2019. The conventionally-powered Fateh (Conqueror)-class submarine will displace approximately 597 tons submerged and be equipped with six torpedo tubes. Iranian propaganda aside, the Fateh-class follows over twenty years of development that began with construction of a 10-ton swimmer delivery vehicle in the 1990s. Iran’s patient, incremental approach to its submarine program may offer lessons for Taiwan’s submarine aspirations. Start small and apply the lessons learned to the submarine Taipei needs.

However, Taiwan needn’t spend twenty-five years building up to its first ocean-going submarine. Taiwan has a larger economy and more highly developed shipbuilding, industrial and technological base than Iran. Also, the Taiwanese Navy has over thirty years of experience in operating, maintaining and repairing submarines. However, like Iran, Taiwan has no experience in building submarines; a task significantly more challenging than surface ship construction. The fabrication of hull and propulsion components is more complex than that of surface ships; the metallurgical stresses involved are much greater and the space constraints more restrictive. Those factors all but preclude an ambitious start to any submarine program. Most successful submarine builders started with comparatively small submarines; under 300 tons submerged displacement. They can be built relatively quickly, are cheaper and involve less technical risk than an ocean-going submarine that typically displaces 800 tons or more submerged. Moreover, the builder can exploit commercial technologies used in midget submarines; scaling them up to meet requirements.

The first unit of any warship class, whether surface or subsurface, will encounter unexpected problems that must be detected and resolved. A one- to two-year testing program will identify those problems and Taiwan has the engineering expertise and technology base to resolve them. Once the challenges are fully understood, construction of an 600 to 800 plus ton submarine can begin with far less risk than doing so without prior testing and examination. Taking that approach would enable Taiwan to start construction of its first indigenous ocean-going submarine by 2025 and have a realistic prospective of four in service by 2030.

More importantly, Taiwan’s computer and engineering expertise may also enable it to build unmanned underwater vehicles (UUVs) can be employed for minelaying, deception or surveillance missions. The detected or suspected presence of a submarine drives the attention of all affected naval commanders. Anti-submarine warfare (ASW) forces must take all submerged threats seriously, making UUVs a potentially great asymmetrical force multiplier. The advent of artificial intelligence can only increase the UUVs’ operational capabilities and options for employment.

Submarines constitute one of the most effective deterrents to an aggressor’s navy. They were history’s first stealth platform and remain the most stealthy weapons systems of today. They represent an asymmetric threat that no aggressor can ignore. Every fleet, no matter how large, must address any submarine threat in its plans before going forward. Taiwan has a highly developed shipbuilding and technology industry but faces a hostile power of growing capability. It needs submarines but has neither the luxury nor the time to risk early failure. Starting small and working up offers a lower risk, cost-effective approach to meeting Taiwan’s submarine force requirements. Finally, the multiple dimensions of the threat (air, cyber, missile and amphibious) places a premium on Taipei’s prioritization and balancing of its defense expenditures. A right-sized submarine force will play a critical prole in Taiwan’s defense.

Carl O. Schuster is a retired captain of the U.S. Navy.