Here's the Armament for the Navy's Constellation-Class Frigates 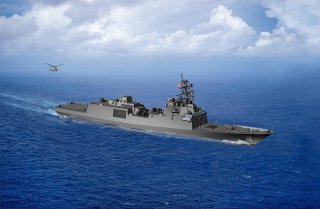 Helicopters, drones, over-the-horizon attack missiles, missile defense radar, and deck-mounted guns are all key elements of the Navy’s vision for its emerging Constellation-class frigate. The new warship is intended to fill a mission gap between the lighter Littoral Combat Ship and more heavily-armed cruisers and destroyers.

“The ships will perform surface warfare, electromagnetic warfare, and air warfare,” said Capt. Kevin Smith, Frigate Program Manager at the 2022 Surface Navy Association Symposium. “In a lot of ways it is like a DDG (destroyer), it just does not have all the magazine capacity and does not have all the armament you would expect of a DDG. This is a frigate.”

At the same time, these frigates will be armed and combat-capable warships equipped with over-the-horizon Naval Strike Missiles, Rolling Airframe Missiles, and the Mk 110 57 millimeter gun. The ship will operate with one MH-60R SeaHawk helicopter and one drone, supported by Vertical Launch Systems and Variable Depth Sonar for submarine hunting.

Smith described the frigate’s mission as a multi-purpose approach, meaning it can perform heavy, open-water missions, yet also fill critical mission gaps such as escort operations.

“It’s an agile, multi-mission platform and just like a DDG, it's going to be dual purpose. For things like escort missions for high value units, it is going to take a lot of the workload off of the DDGs and the Cruisers out there,” Smith said.

Missions to escort groups vulnerable surface ships passing through strategic waterways may not need the firepower of a destroyer, yet it will clearly need to be armed and ready for maritime warfare in the event of an attack. By performing these missions, frigates can free up cruisers and destroyers for heavier ocean war missions.

The frigates will receive an Aegis-capable radar system now being integrated into Ford class carriers called the Enterprise Air Surveillance radar, or A/N SPY 6 v3, a sensitive threat detection radar tailored to the frigate’s mission requirements. As part of the SPY 6 family of radars, EASR is a scaled or tailored system, meaning it does not need the range and sensitivity of SPY 6 v1 systems being built into Flight III Arleigh Burke-class destroyers.