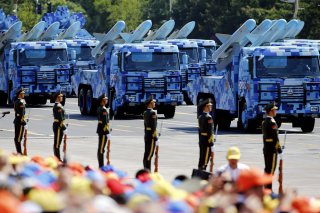 Key point: Beijing has been building a lot of missiles. So many, in fact, that it could overwhelm defenses at different U.S. bases.

A sudden Chinese attack quickly could wipe out U.S. forces in the Asia-Pacific region and block the United States from intervening in a regional war.

That’s the startling conclusion of an August 2019 report from the United States Studies Center at the University of Sydney.

“America’s defense strategy in the Indo-Pacific is in the throes of an unprecedented crisis,” the study’s authors Ashley Townshend, Brendan Thomas-Noone and Matilda Steward warned.

“America no longer enjoys military primacy in the Indo-Pacific and its capacity to uphold a favorable balance of power is increasingly uncertain.”

China’s increasingly modern armed forces in some places and categories already match America’s own forces. And with its thousands of non-nuclear ballistic missiles, China with little notice could bombard forward-deployed U.S. forces as well as American reinforcements coming from the continental United States.

This “growing arsenal of accurate long-range missiles poses a major threat to almost all American, allied and partner bases, airstrips, ports and military installations in the Western Pacific,” the analysts wrote.

As these facilities could be rendered useless by precision strikes in the opening hours of a conflict, the [People’s Liberation Army] missile threat challenges America’s ability to freely operate its forces from forward locations throughout the region.

Alongside China’s broader [anti-access/aerial-denial] capabilities — including large numbers of fourth-generation fighter jets, advanced [command-and-control] systems, modern attack submarines, electronic warfare capabilities and dense arrays of sophisticated surface-to-air missiles — it permits the PLA to hold U.S. and allied expeditionary forces at risk, preventing them from operating effectively at sea or in the air within combat range of Chinese targets.

First, nearly two-decades of war in the Middle East has taken a serious toll on the joint force, wearing out large parts of the military and leaving it ill-prepared for great power competition. Military readiness — or, the armed forces’ preparedness for combat — has been a particularly grave problem.

Owing to the high operational tempo of counterinsurgencies in Afghanistan, Iraq and Syria, in addition to the military’s other global commitments, overall readiness fell to dangerous levels as the services struggled to meet unsustainable demands for overseas deployments, maintenance and training.

By 2017 this situation had become a crisis. Only a third of the Army’s brigade combat teams were prepared for deployment, less than half the Air Force was ready for a high-end fight against a peer adversary, the Navy was facing a self-described “readiness hole” and 53 percent of naval and Marine Corp aircraft were deemed “unfit to fly.” …

Second, while the United States was demanding ever more from its armed forces, it was simultaneously reducing its expenditure on defense and thereby compounding the strain on an already overstretched military.

The root of this problem was political dysfunction within Congress. Following the Budget Control Act of 2011 — a congressional mechanism designed to reign in the federal deficit — real national defense spending fell from its FY2010 peak of US$798.6 billion to just US$613.3 billion in FY2017.

This amounted to a US$550 billion loss in net buying power between 2012 and 2017. Making matters worse, as annual defense budgets became unpredictable in size and were not passed on time, the Pentagon was hindered in its ability to allocate resources efficiently and in a strategic way. The impact of all this exacerbated the military’s readiness crisis and was devastating for the overall size of the force. As a result, by 2016 the Army, Navy and Air Force were either at or approaching their lowest end-strength numbers since the Second World War.

Third, the combined effect of a constrained fiscal environment and the unrelenting tempo of conflict in the Middle East has compelled the armed forces to underinvest in preparations for great power competition. This is a case of the urgent crowding out the important. Over the past two decades, critical military modernisation priorities — from the procurement of fifth-generation fighters and investment in advanced technologies, to the recapitalisation of America’s nuclear triad — have been deferred or slowed by the overall squeeze on resources.

The consequences of this failure to modernise have been dire. Not only has it contributed to the erosion of America’s technological superiority vis-à-vis peer competitors, but it has left the military with an increasingly outdated force that may be “irrelevant” for the kind of highly-contested scenarios that will characterise future wars. . ...

Finally, the global scope of America’s liberal order-building strategy has distracted the Pentagon from focusing on the most serious threats to U.S. primacy. The return of China and Russia as militarily advanced great powers. This, in many ways, is the underlying driver of strategic insolvency today.

“This is not to say that America is becoming a paper tiger,” the analysts conceded. “Washington still presides over the world’s largest and most sophisticated armed forces; and is likely to continue to supply the central elements of any military counterweight to China in the Indo-Pacific.”

“But it does mean that the United States’ longstanding ability to uphold a favourable regional balance of power by itself faces mounting and ultimately insurmountable challenges.”