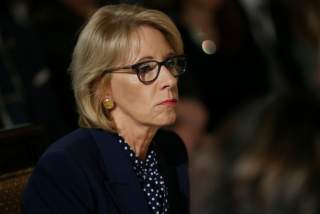 The U.S. Department of Education was not created to be a giant lending institution. But that is what it has become, overseeing nearly $1.5 trillion in federal student loans. At a meeting of college financial aid administrators in maybe-symbolic Reno, NV, Secretary of Education Betsy DeVos proposed to change that by turning the department’s student aid offices into an independent “government corporation.” It would have its own governing board that would, she suggested, be freed of political meddling and motivated to “deliver world-class service to students and their families.”

For sure, it is hard to imagine an independent agency running less efficiently than the U.S. Department of Education, though that is mainly because the bigger the organization, the greater the red tape. I am not aware of evidence that given its size and that it is a government institution, ED is a particularly atrocious steward of student loans. The fact is, as DeVos pointed out in her speech, it is Congress, with approval of the president, that has created the inscrutable profusion of loans, grants, and loan repayment plans—not to mention tax-favored savings accounts and Work Study—that has made federal student aid a tangled web only a professional financial adviser could love. Probably no one could make that into a well-oiled machine.

DeVos laid out few specifics for her proposal, but if an independent Federal Student Aid (FSA) agency had to follow all the rules and qualifications of the current aid programs—and Congress put them in there for a reason—it is hard to imagine the system getting much more efficient no matter who oversees it. With its only mission running aid programs, an independent FSA might be more efficient in watching over schools and loan servicers, but probably not by a lot. And DeVos suggested it would not just be a narrower focus that would make it work better, but greater incentives: a need to “work to secure its financial strength and sustainability.”

I don’t see it. If its job were to run student aid programs as they exist now—to deliver entitlement money right from the Treasury—the financial sustainability of the new FSA would be assured. It would also have no real competitors to push it to do better—private lending is less than a tenth of the volume of generous federal loans—and as a government entity it would presumably have no profit motive. In other words, it would have no incentives to be more efficient or consumer-friendly than ED.

It could also become dangerous. While DeVos said a new FSA should not “look like another CFPB,” one wonders what would keep it from targeting specific types of schools, or servicers, for scrutiny. True, its governors would not be facing popular election, so they might not have as much incentive to demonize for-profit college or unpopular servicers as politicians would, but everyone likes to be applauded for doing the popular thing.

Until this proposal is fleshed out more it should not be dismissed. But from what we have so far, it’s hard to be very optimistic. Indeed, DeVos said that even with the new agency the federal government would continue to “monopolize student lending.” As long as that is the case, we will be nowhere near where we need to go.

This article by Neal McCluskey first appeared at The Cato Institute.