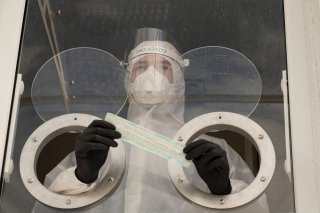 Just three months ago, none of us imagined what the world would look like today. So it is with due recognition that prediction is an imprecise science that we offer the following thoughts from our respective sides of the Atlantic about what the reaction to the Coronavirus tells us for what may come next in geo-politics and geo-economics.

First, the nation state is back. At a time of huge challenge and public fear, people look to their national leadership to guide them. Within the global order of nation states, things are shifting too. The crisis has accentuated the decline of the U.S. in relation to China—the most powerful country on earth cannot manage a pandemic as well as “emerging” China (even allowing for unreliable Chinese statistics). Russia is finding a new place too, snuck in alongside China. U.S. reluctance to treat allies as allies is weakening the transatlantic bond. Within the EU, the debate about the mutualization of Eurozone debt will be hard to resolve, and one of the pillars of European integration—a border-free Europe—disappeared at speed as the virus took hold.

Second, the state is intervening in the nation to an unprecedented extent. We see eye-wateringly large economic intervention with great swathes of the economy and national workforce brought into the public purse, at least temporarily. We have seen extraordinary curtailment of the most basic individual freedoms, including as Prime Minister Boris Johnson put it “the ancient and inalienable right of every freeborn Englishman to go to the pub.” Some have protested this infringement of their liberties, but many have complied, and some have favored greater restraint.

Third, the international order as we have known it has partially evaporated in the face of the virus. No G7 or no G20 and the United Nations has been ineffective. Even the World Health Organization, whose hour this should have been, has found its authority questioned and its ability to set the agenda challenged. In the 2008 financial crisis, the G20 worked as a highly effective macro-economic management forum. Not so far this time. And yet, to tackle climate change, poverty, and—yes—pandemics, we need multilateralism more than ever. No country should be better placed to lead than the U.S.

Fourth, the effect of the pandemic will not be evenly distributed, either within or between countries. The poor within countries will be hit harder—at least economically—than the rich. Poorer countries with less developed healthcare systems will be hit harder both medically and economically than richer ones. This is likely to exacerbate the opinion of those who feel the current system is not working for them. Linked to the resurgence of the nation state, expect more populist politics, and at the international level more assertiveness.

In business terms, we can expect both companies and countries to drive changes to the global “just in time” supply chains which have developed. States will do this by exerting more control over foreign investment, particularly M&A of a wider range of companies than hitherto, and over the sourcing of key components. Companies will seek greater diversity and proximity. Technology will play a part in this—robotics and 3D printing potentially allowing production before thought uneconomic to be brought back on shore. There are major implications for economic links to China, combined with the increasingly assertive U.S. policy towards its principal strategic rival. There is a bumpy road ahead in the relationship with China.

Another area in which use of technology may change is in relation to data. Some countries have coped with the pandemic by using apps (voluntarily or compulsorily) to trace people’s contacts if they become infected. Privacy campaigners have been alarmed at the potential intrusion into people’s civil liberties. But many may think that a strictly limited and controlled intrusion into our privacy for the public good is worth it if it means we don’t have to have the massive intrusion into our liberties that we have seen over the past month. This needs public debate, or today’s acceptance will become tomorrow’s resistance.

The speed and smoothness with which a very large proportion of the working population has switched to home working will leave its mark. Companies are already asking themselves whether having everyone in an office five days a week is necessary. Knowing that remote working can be truly effective, and bring quality of life benefits, will bring changes to corporate behavior. Finance Departments will eye the real estate budget as an opportunity for cost-cutting.

Finally—on a positive note—we are in the midst of a truly massive unintentional experiment in carbon reduction. People across the world are breathing cleaner air. While few would suggest that lockdown would be a sustainable way to tackle climate change, the data that researchers will extract from the lockdown and unlocking will bring much greater evidence to the policy-making necessary to get us to net zero carbon economies. Will the populations of the world’s mega-cities remain quiet about the return of polluted air? Expect the climate movement to become more embedded into mainstream politics.