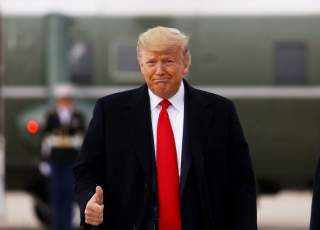 Key point: Andrew Johnson was the first president impeached, but he wasn't removed from office. Could the same fate await Trump?

Impeachment talk has been ongoing since President Donald Trump first stepped into office.

Democrats in Congress, moving on from the Russia collusion allegations, have now launched an attempt to bring up impeachment over a phone call between Trump and Ukrainian President Volodymyr Zelensky, in which they assert that Trump asked him to investigate former Vice President Joe Biden’s son in return for military aid.

Speaker Nancy Pelosi has called for an “impeachment inquiry,” which still falls short of actual impeachment.

Much of the impeachment speculation over the last few years has been little more than fan fiction.

However, there is a significant base of progressives in Congress who want to proceed with impeachment regardless of its potential for success or failure.

The Constitution lays out a process for impeachment under Article I, Section 3, but the truth is that the specific standard for what constitutes “high crimes and misdemeanors,” has never been entirely established.

So what we are left with is a highly political process. Members of Congress—and the public in general, since they are ultimately accountable to the people—must decide if the president is guilty of the charges and should be removed.

It was an important moment in American history in times even more fraught than our own.

Andrew Johnson is perhaps little-known today besides being the disappointing successor to Abraham Lincoln and, of course, the first president to be impeached.

Johnson’s presidency was hardly successful, but it would be unfair to overlook why exactly the Great Emancipator put Johnson--a former Democrat--on his ticket in 1864, booting off the stalwart Republican Hannibal Hamlin.

Whatever his other faults, Andrew Johnson was a brave man.

He was a Southerner from Tennessee, but when most of his region left the Union, he stood by his country. Johnson, who was a senator at the time of secession crisis, said dramatically in speech that he would stand by his country no matter what, and echoing his hero, Andrew Jackson, said “that the Constitution shall be saved, and the Union preserved."

He became the military governor of Tennessee, a state that had seceded, at great personal risk.

Though he had never been committed to the anti-slavery cause, Johnson freed his own slaves in 1863 and pushed for abolition in Tennessee in 1864, proclaiming himself a “Moses.”

For his loyalty to the Union and dedication to the cause, Johnson was added to Lincoln’s ticket in 1864 in what looked like a tough election. He was a symbol of unity.

But after the assassination of Lincoln in 1865, and his rise to the presidency, it was clear that all was not well between Johnson and the Republican coalition that had led the country through the Civil War.

Many anti-slavery Republicans became disillusioned with his leadership and livid with his vetoes of civil rights legislation meant to protect black voters in the South. Much of this legislation got passed over Johnson’s vetoes.

Eventually, political warfare broke out between Johnson and the so-called “radical” Republicans in Congress.

It got so bad that these Republicans laid a trap for Johnson, passing the Tenure of Office Act—again over a Johnson veto—which barred presidents from removing cabinet members from office without Senate approval.

The law was a violation of the separation of powers and was later ruled unconstitutional by the Supreme Court in 1926.

But Johnson jumped right into the trap and fired War Secretary Edwin Stanton without Senate approval. He triggered the first impeachment trial of a president in American history.

From Moses to Pharaoh

Republicans in Congress initiated the impeachment of Johnson in 1868. These were heady days following the most catastrophic war in American history, where America itself almost ceased to exist.

The many Republicans, Johnson was standing in the way of solving the central issue of that war—the enslavement and disenfranchisement of black Americans.

The trial was ruthless and acrimonious, a political show in which legislators laid out their grievances against a sitting president.

At the trial, Sen. Charles Sumner, a fervent anti-slavery Republican, denounced Johnson ferociously, saying, “He once declared himself a Moses of the colored race. Behold him now the Pharaoh.”

Yet, as unpopular as Johnson had become, essentially being impeached by his own party, there was some trepidation to outright removing him from office.

As historian David O. Stewart, author of “Impeached: The Trial of Andrew Johnson and the Fight for Lincoln’s Legacy,” noted, many European observers thought the whole trial showed that America was becoming something akin to an unstable banana republic.

“Most European observers found the spectacle confusing, a distasteful example of America’s rambunctious politics,” Stewart wrote. “The Times of London was puzzled. Congress had passed its legislation over Johnson’s veto. What need was there to remove him?”

Johnson may have been a bad president, but many saw the impeachment attempt as unnecessary vindictiveness. Even more, the trial failed to convince many that the president truly was guilty of “high crimes and misdemeanors,” despite his improprieties.

The House impeached Johnson regardless, but the Senate famously acquitted Johnson by a single vote and fell just short of the two-thirds needed to remove him from office.

While Sen. Edmund G. Ross, a Republican from Kansas, who cast the deciding vote, has occasionally been praised for his act of courage in voting against impeachment, it is likely that the vote itself was influenced by bribery and corruption by Johnson political partisans.

A Necessary but Dangerous Tool

Impeachment is in some sense an option of last resort to use against a president, which the Founders wisely included in the Constitution. It has certainly been used successfully against other officials in U.S. history.

Nevertheless, it has a high bar for success and comes with many potential downsides, especially when dealing with the presidency.

The legacy of the Johnson impeachment is somewhat uneven. While radical Republicans put a black mark on Johnson’s presidency, they also wasted an enormous amount of political capital on a trial that eventually went nowhere.

Today, if the Democrat-controlled House opts to impeach Trump, it will be up to convincing the Senate—with a Republican majority—to convict the president. A tall order.

Ultimately, elections, not impeachment trials, have been the best tool to remove presidents from office.

Jarrett Stepman is a contributor to The Daily Signal and co-host of The Right Side of History podcast. This first appeared earlier in 2019.