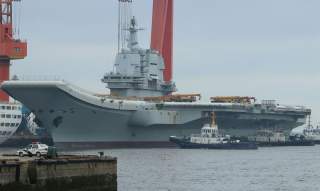 Key point: It is one thing to buy a carrier, but it is another to build one. By making its own, China is trying to become a first-class sea power.

2018 was a big year for China’s first domestic aircraft carrier. The carrier, known as Type 002, went on three sea trials in the summer and fall. In late December, it left for its fourth sea trial, finally carrying arresting cables and a few planes. The fourth trial is scheduled to occur between December 29, 2018 to January 11, 2019, per a warning issued by China’s Maritime Bureau.

Depending on the results of this trial, the Type 002 may finally be getting close to actually entering service as an active ship in the People’s Liberation Army Navy (PLAN). The activation of the Type 002 could provide the PLAN with a critical capability boost at a time when Chinese leaders have been stepping up rhetoric regarding Taiwan.

Since its inception, the Type 002 has always been kind of a stopgap or prototype carrier. Articles discussing its features often describe it as an evolution of the earlier Admiral Kuznetsov-class carrier that China bought from Ukraine in 1998, focusing more on the differences than the similarities. The two ships have even been described as “sister ships”.

Like the older Kuznetsov-class (now Liaoning), the Type 002 is STOBAR carrier, relying on a “ski-jump” to launch its aircraft into the air.

But it’s no secret that China’s aspiration is to build a CATOBAR carrier, which uses steam or electromagnetic catapults to launch aircraft. So why was the Type 002 built as a STOBAR?

The likeliest reason is a need to get carriers out there as soon as possible to project naval power. China’s political goals require more naval power before the end of the decade, and a true CATOBAR carrier is unlikely to be ready by then.

As a variation of an existing carrier, the Type 002 would be far faster to produce.

Indeed, everything about the Type 002’s development and testing process seems to be underscored by a current of urgency. The date of commissioning has been steadily moved up: the Type 002 was originally expected to enter service in 2020, but as of December 2018, experts expect it to enter service by the fourth quarter of 2019.

Of course, this is enabled by the trials going relatively smoothly. The first trial demonstrated that the new propulsion systems (originally developed for a newer CATOBAR carrier) worked properly. The second trial tested the carrier’s communication and navigation systems.

Information on the third trial (which occurred in October and November 2018) is scarce, but the Type 002 was fitted with aircraft arresting gear following the second sea trial, and several planes and helicopters (or mockups thereof) were loaded onto the carrier prior to the trial. However, it was noticed by some sources that the deck did not have the necessary anti-skid coating at the time.

The fourth, and current (in January 2019) sea trial probably will involve actual launching and recovery of aircraft.

But this advantage is likely not considered to be a major handicap for the PLAN. Both the Type 001 and 002 were never expected to match American carriers in pure combat capability. Rather, like stated before, they serve as a way to increase China’s prestige and allow the PLAN to gain experience utilizing carriers.