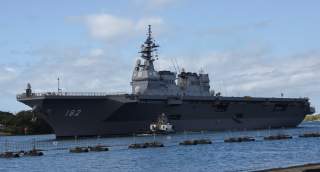 Key point: The outcome of such a war would be anything but straightforward.

The First World War is the gift that keeps on giving when surveying modern Asian geopolitics and pondering how to manage it.

Consider what the Great War has to say about the military balance between China and Japan and how an East Asian war might unfold. Conventional opinion in Japan has long held that China’s People’s Liberation Army (PLA) would more or less steamroller the Japan Self-Defense Force (JSDF) in wartime. Demographics, economics, defense budgets, you name it: they all line up on China’s side.

And there’s no gainsaying the impact of decades of meteoric economic growth and defense-budget increases on the mainland coupled with economic malaise in the island state. A productive economy furnishes the resources to amass military might while a stagnant one withholds warmaking resources. Beijing has availed itself of the opportunity flowing from its economic reform and opening project. To all appearances the balance of forces now tilts alarmingly toward the PLA.

But not so fast: brute numbers of ships, planes, and missiles aren’t everything in combat. Far from it. The ability to combine all available assets for tactical and operational gain is what counts, and the order of battle—the panoply of hardware making up the military inventory—comprises only part of a nation’s martial portfolio. For example, the geographic setting matters. That’s why Clausewitz counsels commanders to evaluate the strength and situation of potential combatants when undertaking a net assessment. Tallying up hardware tells only part of the story.

And situation—geography—takes rank with Japan.

In that sense the island state resembles another island state situated off a great continent and squaring off against a continental aggressor. Namely, fin de siècle Great Britain. The British Isles stand athwart the sea lanes connecting the Low Countries, Germany, and Baltic countries to the broad Atlantic Ocean. A strong British fleet can barricade northwestern European navies within the North or Baltic seas with ease compared to, say, a blockade of France, which features Atlantic and Mediterranean coasts populated by multiple seaports.

British seamen had to block two seaways. Sealing the narrow English Channel was a fairly simple prospect. It could be done with minefields, small torpedo craft, and gunnery arrayed along the shoreline. That left the wide northern corridor between Scotland and Norway. Some 250 nautical miles of open sea separate the Royal Navy station at Scapa Flow, in Scotland, from the Norwegian coast. Britain’s Grand Fleet thus had to erect a defense perimeter spanning those waters to wall in the German High Seas Fleet. That made for an asset-intensive but workable strategy.

Now, the resemblance between the two offshore contestants is admittedly inexact. All comparisons are. Britannia ruled the waves in yesteryear whereas Japan isn’t the global marine hegemon of its day. It can nevertheless contemplate blockading the north Chinese seaboard—just as Britain cordoned off the North Sea and English Channel and mostly penned up the German surface fleet within.

Asian geography is even more auspicious for offshore combatants. The Japanese home islands and southwestern islands—the Ryukyus and Senkakus—enclose the mainland coast north of Taiwan. Sea traffic must exit the “first island chain” through the straits puncturing the island chain. The defense perimeter already exists, and it has immovable guard towers in the form of islands. Fortify the islands, array combat vessels or warplanes to close the straits, or both, and you confine Chinese shipping and aircraft to the China seas.

China depends on ready access to the Western Pacific and Indian Ocean for economic and military ventures. If the JSDF throttles that access, it can make major trouble for China—and that prospect would discourage PLA mischief-making. China could be deterred where imperial Germany was not.

Best of all, swarms of small craft and planes, manned or unmanned, could spearhead island-chain defense alongside land-based armaments such as anti-ship and anti-air missiles. Such implements are cheap compared to, say, Aegis destroyers. They can be built in abundance. This is an affordable strategy—helping Tokyo offset China’s advantage in defense budgets and force structure. The Japan Maritime Self-Defense Force (JMSDF) doesn’t need latter-day counterparts to pricey Royal Navy battleships and cruisers to patrol the blockade line. It can make do with “flotilla” craft reminiscent of the rudimentary subs and torpedo craft of yore.

Plugging the English Channel, a narrow sea, makes a better metaphor for JSDF strategy than does guarding the Scotland-Norway corridor. Japan can wage perimeter defense on the cheap.

U-boat blockade runners were another problem for Britain. They simply swam underneath Royal Navy blockade craft prowling the surface and made their way out to the high seas to sink merchant shipping. But here too the comparison works in favor of contemporary Japan. Undersea terrain in and around the straits imparts predictability to submarine movements. It compels skippers to traverse predictable pathways to reach high-seas operating grounds. Terrain also limits how deep they can dive while essaying a breakout. Narrowing subs’ operating space simplifies matters for sub hunters.

In short, the JMSDF and fellow services could pull off the same feat the Royal Navy did a century ago—an effective blockade—without deploying the same weight of armed force. In Clausewitzian parlance: the advantage in military strength goes to China, the advantage in geographic situation to Japan. It’s far from obvious who commands the overall advantage in a one-on-one fight.

But it’s doubtful any East Asian fight would be a one-on-one affair. This makes a heartening departure from the First World War precedent. While Japan is not today’s reigning maritime hegemon, it is the beneficiary of a preexisting and durable alliance with the reigning maritime hegemon, the United States. What it lacks in innate strength it can make up in allied solidarity so long as the transpacific relationship endures.

Aggregating JSDF capabilities with those supplied by U.S. forces in the Pacific paints a truer picture of the force balance.

What if a proven Anglo-American alliance had been in place by 1914, when the guns of August rang out? The United States had not consummated its ascent to world power by then, but it was a power on the make. Its economic and industrial might waxed even as British supremacy started to wane relative to continental foes. It’s conceivable Kaiser Wilhelm & Co. would have desisted from invading Belgium and France had yet another great power arrayed itself with the Entente before war broke out. Peace may have held had America made its weight felt in European geopolitics.

It has made its weight felt in Asian politics for many decades now. The U.S.-Japan Security Treaty dates from the 1950s—1960 in its current form—and held firm through the Cold War, the post-Cold War doldrums in Asian geopolitical competition, and China’s rise to regional eminence. No pact commits one ally to automatic war should another do something rash, but the U.S.-Japan alliance comes as close as any multinational arrangement could. The Security Treaty represents the gold standard for alliance solidarity alongside the North Atlantic Treaty that underwrites NATO.

So the East Asian military balance appears ambiguous when comparing orders of battle, while the U.S.-Japan alliance commands a pronounced geographic advantage. That leaves foreseeing and “gaming” out battle scenarios to determine whether the allies have the implements they need to prosecute real-world operations. True-to-life wargames will expose shortfalls and help commanders and officials align force design with strategy.

Great Britain came out of an age of “splendid isolation” under the press of great-power war a century ago. That involved wrenching change and encouraged Berlin to doubt the scope and fervency of British commitments on the Continent. Tokyo knows it does not have to face the PLA alone—and Beijing knows it too.

And then there’s the question of skill and valor in the services. War is a human affair. As Admiral Bradley Fiske observed during World War I, navies are fighting machines. (The same goes for armies and air forces.) Machines underperform without skilled users. Proficient mechanics wring maximum work out out of their machines, harnessing all of their theoretical potential. Machines operated by slipshod or lackadaisical users fulfill only part of their potential. Two contending forces could deploy exactly the same armaments, sensors, and related equipment. One would still lose. And in all likelihood it would lose because of training deficiencies, a deficit of strategic, operational, or tactical vision, or basic human frailties such as tepid fighting spirit in the ranks.

Intelligence specialists can count up forces, more or less, and estimate how they may perform in action. Human prowess is harder to measure but no less crucial. China has not fielded a serious oceangoing navy since the Ming Dynasty six centuries ago. It is a newcomer to martial strife at sea and has little relevant heritage to tap for inspiration and insight. Japanese mariners, by contrast, enjoy a great legacy: the enviable record compiled by the Imperial Japanese Navy. Japan scholar Alessio Patalano notes that for obvious reasons the JMSDF skips over the World War II imperial navy when seeking inspiration. Instead seafarers look back to the Meiji navy headed by Admiral Heihachirō Tōgō—the service that defeated Chinese and Russian navies, and did so mere decades after its founding. That’s a legacy to take heart in.