Here's The Wild Story Involving Ilhan Omar, The 'Imam of Peace' and the Krassenstein Brothers 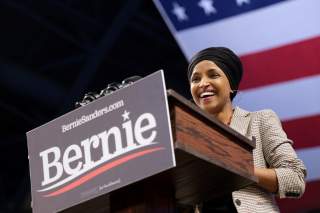 A Jerusalem Post story suggesting that Rep. Ilhan Omar could secretly be a foreign agent for the nation of Qatar is highly dubious.

Foreign elements are pushing a dubious story, targeted at American conservatives, that Ilhan Omar is a secret agent of the nation of Qatar.

The claim comes from a deposition from a Canadian self-described problem-solver for the Saudi ruling family — the arch-nemesis of Qatar — who gave 200 pages of testimony that offered a haphazard smorgasbord of accusations against the country.

The Oct. 23 deposition of the fixer, Alan Bender, was taken as part of a case that had little to do with him, and most of the questions and answers had no seeming relevance to the case either.

The Daily Caller News Foundation reviewed the deposition and deemed it not credible. It even gets Omar’s job wrong, repeatedly calling her a senator.

But the Jerusalem Post published that a “Florida court has heard” that Omar was a secret foreign agent, and the story rapidly began making the rounds among American conservatives.

In the deposition, Bender attested that the Qataris called him out of the blue, flew him to the royal palace, and shared their misdeeds with him in extreme detail, despite his prior association with their rivals.

The deposition includes all manner of accusations, such as that Omar is a “sex maniac” and that reporters at CNN, the Washington Post and the New York Times are on the payroll of Qatar. Bender appeared eager to expose all of that dirt, yet inexplicably said he’d “rather not” provide key details, such as the names of the reporters supposedly taking bribes.

Bender did not return a request for comment. In the deposition, he said he will “sometimes intervene on behalf of members of the [Saudi] ruling families; mediate, solve their problems.”

Mohamad Tawhidi, an Australian Muslim with a large social media following under the handle “Imam of Peace,” has been pushing the idea that Omar is connected to Qatar for months.

Tawhidi also spuriously accused a journalist at the DCNF of being on the payroll of Qatar for not quickly and uncritically printing storylines pushed by him, despite the DCNF repeatedly covering misdeeds by Qatar. He falsely claimed that any hesitation was because of an editor “who I can confirm works for Qatar…. It took me 48 hours to find out.”

Tawhidi would not tell TheDCNF’s reporter which of his colleagues had supposedly entered into a secret agreement with a Gulf nation.

The Australian Broadcasting Corporation reported in 2017 that Tawhidi’s alma mater said he never graduated and it “does not recommend” him “for lecturing in any way. Accordingly, he has no competency to do religious activities or preach sermons.”

Tawhidi has built 600,000 Twitter followers by criticizing extremist and anti-West elements of Islam.

But the Australian outlet says that after dropping out of university, he studied under a fringe cleric who holds ultra-conservative positions, such as that men may marry nine-year olds, that Sharia law should govern, and that women should not hold roles in government.

“The teachings I learnt were not incorrect but some were better off concealed. The coming year, 2016, will be a big year for me,” he wrote in a letter cited by the ABC. “You will be seeing and hearing more of me in the media and social networks. Thus, I request from you all to keep in mind that my mission is an ideological one.”

As the evidence-free story of Omar as a secret foreign agent spread on social media, the cast of characters got even odder as the Krassenstein brothers got involved.

The left-wing brothers previously allegedly ran Ponzi schemes and online financial scams, and in 2017 law enforcement seized nearly half a million dollars from them, contending it was derived from wire fraud, the Daily Beast reported.

The brothers were not charged with any crime, and soon moved on to a similarly lucrative online venture that involved constantly baiting President Trump on Twitter, garnering large followings by exploiting political tribalism until they were banned from Twitter in May for violating its rules.

On Tuesday, a post on the brothers’ Facebook page (authored by one of their wives) said that four months ago, Bender contacted the Krassensteins to tell them that Tawhidi was working for Qatar’s enemies to spread lies about Omar.

Then in early August, they say, Bender changed his tune and said that Tawhidi’s allegations were true. “It appears that something happened in August which turned both Al-Saleh and Alan Bender against Qatar. Whether it was another foreign government paying them (ie Saudi Arabia) or some other international battle in the mid-east, I am not 100% certain,” the post said.

It is unclear why Bender would contact the Krasensteins. The post says “as the right wing media runs with this story,” even though prominent conservative reporters who have covered Ilhan Omar or Qatar quickly flagged it as baseless.

The Krassensteins attributed the operation to two different countries — the United Arab Emirates and Saudi Arabia — and a host of prominent American conservative figures, a motley crew that would be unlikely to come together around an obscure Canadian businessman.

Yet the Krassensteins did seem to have some insight into the operation. As Tawhidi built suspense endlessly on Twitter about how a second witness would emerge, the Krassensteins said it would be a man named Abdullah Al-Saleh.

They turned out to be right: Al-Saleh tweeted similarly thin evidence a short time later.