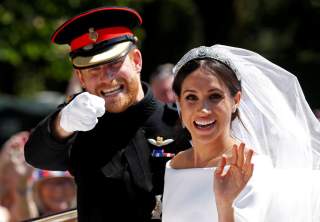 In just the first month of 2020, #MeghanandHarry has been trending across social media more often than not.

In a series of public statements over the Duke and Duchess of Sussex’s widely followed Instagram account, as well as in a public speech by Prince Harry on the eve of his departure for a new life in Canada, the most recent famous Royal couple has distanced themselves in ways both big and small from the Royal Family.

This includes giving up their royal duties and titles. Quite frankly, I would wager the majority of us don’t blame them for these largely unprecedented moves.

That’s because Meghan Markle’s treatment by some media and public commentators since 2016, when her relationship with Harry became public, has shifted from excitement and curiosity to judgment, unrealistic expectations and unfounded accusations that include both overt and implicit forms of racism.

After the fairy-tale engagement in fall 2017 and their marriage in the spring of 2018, public sentiment has seemingly turned against the couple, assisted by the media. This includes a slew of unfavourable comparisons between Meghan and Kate Middleton, the Duchess of Cambridge, and gossip that the Duchess of Sussex is an unpleasant and demanding diva completely out of touch with the royal way of life.

Meghan is certainly not the only woman to experience negative media coverage and shifting public opinions once entering the Royal Family.

Harry’s mother, the late Diana, Princess of Wales, also dealt with the devastating effects of an intrusive and unkind media, especially after her divorce from Prince Charles in 1996.

The Duchess of Cornwall, Camilla Parker-Bowles, also faced extensive scrutiny and unpopularity because of the role she played in the breakdown of Charles and Diana’s marriage. She was subjected to unkind commentary about her age and appearance for years and compared unfavourably to the glamorous Diana. Sarah Ferguson, Prince Andrew’s ex-wife, was similarly derided about her appearance.

Further back in history, when King Edward VIII abdicated the throne in 1936 to pursue his relationship with American Wallis Simpson, she was painted as a promiscuous, scheming femme fatale — not unlike the modern-day commentary directed Meghan’s way.

This treatment of women who enter into relationships with men of the Royal Family suggests a distrust of non-royals and a protectiveness of the family boundaries. Who gets to be a royal is apparently a matter of grave public debate.

This ongoing public distrust of non-royal women includes a series of gender, race and class beliefs that are unsettling. The things that set Meghan apart from Kate in public perception are telling.

The Duchess of Cambridge is from an upper middle-class family with longstanding ties to the British aristocracy. She met her husband, Prince William, while attending the prestigious St. Andrews University and happily left her independent life behind to become a royal.

Since her marriage and the birth of her three children, Kate has been coded as ideal in terms of her ethnicity, class and ambitions.

In contrast, Meghan is biracial, American and was raised in a largely middle-class environment. She had an established career as a Hollywood actress and a lifestyle brand before meeting Harry.

She has been an outspoken advocate for gender and racial equity her whole life. And she’s been candid about the challenges of leaving all that behind to join Harry as an ambassador of the British monarchy. The different standards to which Meghan and Kate have been judged tell a story indeed of classism, sexism, nationalism and racism.

This largely critical treatment of women entering the Royal Family, and Meghan in particular, operates from three underlying sets of beliefs.

These include a belief in romantic fantasy, nationalism and the danger of women in positions of power.

Each of these belief systems held by the public and the media are not uniform. There is support as well as suspicion among the public about Meghan and Harry’s relationship. This reflects how the couple has become a signpost for sentiments not wholly related to them at all, but are reflective of broader social anxieties at the moment.

Outsider women like Meghan are held up to an unreasonably high standards due to the fantasy narrative of a woman meeting her prince and living happily ever after.

As we watch this play out in real life via figures like Princess Diana and the Duchess of Sussex, the public doesn’t just project their positive fantasies onto the storybook romances, but also their negative emotions, and the woman at the centre of it receives all the flack. They become the lightning rod for all of the complexity such a powerful fairy-tale narrative evokes in western popular culture.

Further, present-day Great Britain was built through a centuries-long project of colonial expansion. That history is part of how it defines itself as a nation.

Colonialism results in a world view that distrusts others, outsiders or those who are different. This helped rationalize violent practices of land occupation and slavery, because it dehumanized those victimized by the British Empire.

This continues with the xenophobia and racism present in the modern-day U.K. It also extends to additional frameworks of otherness that operate when it comes to classism and sexism.

British nationalism is most evident in how the U.K. public circulates negative stereotypes about Meghan’s biracial identity, which even the Royal Family, spurred by Harry, spoke out against in 2016 when it was first revealed the couple was dating.

Finally, if public discussions of gender inequity in the past four years has taught us anything, it’s that women in positions of power, whether political or otherwise, make some uneasy and sometimes angry.

If the vitriol directed at Meghan by social media users reflects a subset of public opinion, it’s fuelled by a belief that she’s single-handedly destroying the fabric of the Royal Family and the traditions it upholds.

This criticism amounts to a condemnation of Harry and Meghan’s attempts to push against tradition, to propose new models, to hold a different world view. Ironically, their choices now seem understandable in the face of the ongoing vitriol — both as an act of self care and an act of refusal to tolerate further abuse.

If we’re ever to move past these outmoded values of gender, race and class, we need to now wish them well — and challenge those who would prefer it all remains the same.

Shana MacDonald, Assistant Professor of Communication Arts, University of Waterloo. This article is republished from The Conversation under a Creative Commons license. Read the original article.