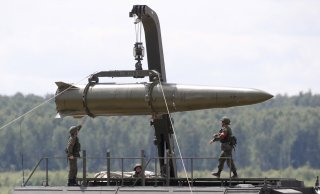 On February 27, just days after Russia’s invasion of Ukraine began, President Vladimir Putin announced that he had placed Russia’s nuclear forces on high alert in response to “aggressive words” from NATO’s key members. This move was an apparent attempt at nuclear brinkmanship, increasing the risk of a nuclear disaster, to coerce the West into stopping its support for Ukraine. If this was the goal, it obviously did not work. Since Putin’s decision, Western countries have imposed numerous rounds of sanctions on Russia and provided billions of dollars in military assistance to Ukraine.

At the same time, however, it is important to realize that there is still a lot that the West, especially the United States, can do to damage Russia but has chosen not to. For example, even as the United States delivers its much anticipated M142 HIMARS rocket systems to Ukraine, it has equipped them with mid-range rockets instead of long-range ones that could strike targets on Russian soil. The reason for this phenomenon, of course, is partly the United States’ fear of potential Russian nuclear escalation. But why is this the case? Why have Russian nuclear threats not stopped Western countries from supporting Ukraine and punishing Russia but appear to have prevented them from going all out to ensure a Russian defeat?

To answer this question, it is essential to understand the difference between deterrence and coercion. Deterrence is the threat of retribution to make sure that an adversary does not deviate from the status quo, whereas coercion intends to force an adversary to accept a change in the status quo. In the case of the Russo-Ukrainian War, the status quo for the West includes sanctions on Russia and military support to boost Ukraine’s defenses, but not its overtly offensive capabilities. Generally, as Todd S. Sechser and Matthew Fuhrmann point out in Nuclear Weapons and Coercive Diplomacy, nuclear threats work as a deterrent but not as a means of coercion. Consequently, Russia’s nuclear threats have not been able to coerce the West into halting its sanctions or support for Ukraine but have deterred the West from drastically increasing its support.

Successful coercion and deterrence both require capability and credibility. As Russia has the world’s largest nuclear stockpile, no one doubts its nuclear capabilities. However, nuclear coercion tends to lack credibility for three reasons. First, when a nuclear state wants to coerce an adversary, its nuclear weapons are often redundant. Because nuclear states tend to have formidable conventional forces as well, nuclear weapons usually do not change their opponents’ calculation of whether the nuclear coercer is able to carry out its threat. In the case of the Russo-Ukrainian War, Russia obviously believed that it could use just its conventional forces to achieve its objective, whether it was Ukrainian neutrality, regime change, or the independence or annexation of the Donbas region. Therefore, at the onset of the crisis, Russia, in order to force Ukraine and the West to negotiate, deployed near its border with Ukraine nearly one-third of its troops but no nuclear weapons. Indeed, as Russia carries out its threat of force in the form of an armed attack, it does so with conventional forces, not nuclear weapons.

Second, carrying out a nuclear threat would inflict on the coercer huge economic and normative costs that might simply be too much to bear. International criticism and crippling sanctions against Russia kicked in immediately after the war began. Some, like Michael McFaul, say that it will take a decade for Russia’s economy to recover to its pre-invasion size. We can only imagine what the reactions and sanctions would be if Russia had used nuclear weapons to attack Ukraine.

Third, given the enormous costs and risks of carrying out a nuclear threat, including potential nuclear retaliation, rarely do the expected benefits outweigh those costs and risks. Nuclear states typically do not face existential threats. Therefore, when it seeks a change in the status quo through coercion, it seeks something it has managed to live without. Usually, that something is not so valuable that it is worth the costs and risks of using nuclear weapons. In the case of the Russo-Ukrainian War, while Western sanctions and military support for Ukraine have proven to be at least troublesome for Russia, they do not constitute an existential threat. Therefore, the benefits of halting the sanctions and military assistance are not worth what might happen to Russia if it used nuclear weapons.

These three factors make Russia’s use of nuclear coercion to stop the West from supporting Ukraine less credible and less likely to succeed, but they do not apply to deterrence, which, unlike coercion, seeks to maintain the status quo. First, even though nuclear states often do not need nuclear weapons to change the status quo, the status quo itself is usually a result of the presence of nuclear weapons. Considering the U.S. response to the Iraqi invasion of Kuwait in 1991, it is logical to assume that without nuclear weapons, Russia would suffer much more severe measures from the United States and the West.

Second, whereas carrying out nuclear coercion will lead to enormous normative and economic costs, using nuclear weapons to defend the status quo will result in less criticism and retribution. In fact, we tend to think of deterrence as a good thing and coercion as a bad thing, even though these words themselves do not carry normative judgments. If Ukraine had nuclear weapons, for example, few countries would criticize or punish it for using them against Russia because Moscow changed the status quo.

Third, whereas coercion aims to obtain something the coercer does not have, deterrence aims to prevent the loss of something it already has, which the deterring state is more likely to consider an existential interest. If Ukraine uses Western-supplied long-range offensive weapons to attack targets on Russian soil, Russians will realize that they may lose a war the Russian government assured them that they would win. In this scenario, Putin may view the change in public opinion as a threat to his legitimacy and consider the costs and risks of using nuclear weapons worth taking. As Director of National Intelligence Avril Haines told Congress, for example, “Putin could use the nuclear option if Russian military forces either fell substantially short of reaching their objectives in Ukraine or appeared to be losing the war.” All these factors play into the calculations of world leaders and make nuclear deterrence more credible than nuclear coercion. In the case of the Russo-Ukrainian War, Russian nuclear weapons are able to deter the West from escalating its military assistance to Ukraine but unable to coerce the West to halt it altogether.

Since the start of the war, the West has consistently condemned and sanctioned Russia while providing military assistance to Ukraine. Ever since Russia threatened the possibility of nuclear catastrophe, however, the West has also held back from giving Ukraine weapons that could reach Russian soil. Russia’s nuclear weapons can explain this phenomenon. They cannot stop the West from supporting Ukraine because nuclear weapons do not work well as a means of coercion. Their redundancy in achieving objectives, the economic and normative costs of using them, and the relatively low benefits of the objectives compared to those costs and risks have made nuclear coercion less credible. However, nuclear weapons work well as a deterrent because all these factors do not apply to deterrence, which seeks to maintain the status quo. Therefore, Russia’s nuclear weapons have prevented the West from escalating its assistance to Ukraine but failed in stopping it altogether, at least so far.

Ruodan (Danny) Xu is an undergraduate student at Brown University studying International and Public Affairs and an editorial intern at The National Interest.