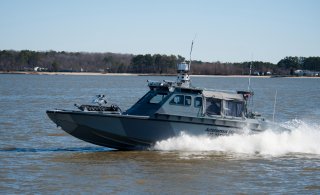 China has formally begun construction of its most advanced “large unmanned ship” ever, although very few if any details are available regarding what the ship may be capable of.

“Featuring a high-speed hydrofoil trimaran design, the drone ship is characterized by its high speed, long endurance and fully domestically developed propulsion system, in addition it can independently carry out missions under different scenarios,” the Global Times stated.

The image of the drone ship looks quite similar to the external configuration of the U.S. Sea Hunter sub-hunting drone, a Defense Advanced Research Projects Agency program that aims to engineer a first-of-its-kind unmanned surface ship to hunt submarines, mines, and surface threats.

It is not clear just how many surface drones China is developing, but this emerging drone seems to suggest that China may be seeking to replicate the current U.S. Navy effort to build a large fleet of unmanned vessels. As part of a broad campaign to develop more unmanned vessels, the U.S. Navy is building small, medium and large unmanned surface vessels. The Medium Unmanned Surface Vessel, for instance, is the farthest along in terms of development, but it is only a small part of the Navy’s fast-growing fleet of unmanned systems.

Although the U.S. Navy has advanced sonar, autonomous mine-hunting drones, unmanned surface command and control technologies, and sensors, it is not clear what kinds of innovations the Chinese might be working on. Given that this project appears to be only at its inception, it seems likely that Chinese surface drone engineering may be considerably behind the United States’ programs. It is not surprising that the initial Chinese image closely resembles U.S. platforms already in existence, given the PLA’s known tendency to attempt to mirror or replicate U.S. innovations in the area of weapons and platform development.

One crucial aspect to consider is drone autonomy. Can Chinese surface drones operate in coordinated, autonomous groups that draw upon algorithms to enable connectivity and operational synergy? The U.S. Navy has been working on this for years through its Ghost Fleet program, which is now well evolved. Small groups of coordinated surface drones are increasingly capable of networking, sharing key information, and performing functions in relation to one another based on autonomously gathered and analyzed data.