History has Lessons for Why America Must Defend Taiwan 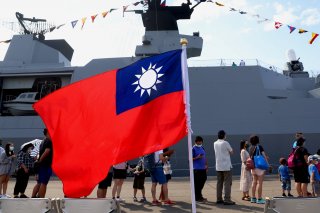 Tensions in the Taiwan Strait are higher than anywhere else on the planet. While the region has been a flashpoint for decades, Beijing’s ambitious agenda for reunification under President Xi Jinping has raised cross-strait tensions to levels not seen since the Taiwan Straits Crises of the 1950s. Taiwan’s defense minister Chiu Kuo-cheng warned earlier in October that China would have the ability to invade by 2025.

China continues to threaten and intimidate Taiwan and, in a recent show of force, sortied 148 planes into Taiwan’s air defense identification zone in the course of just a few days. When a Taiwanese air controller recently challenged a Chinese aircraft, the pilot responded “with an obscenity involving the officer’s mother,” according to the New York Times. China’s lack of airmanship and communications discipline, combined with a hyper-aggressive nationalist agenda, significantly increases the odds of miscalculation that could quickly turn deadly.

The United States, meanwhile, has continued arms sales to Taiwan while also maintaining a contingent of special operations units on the island over the past year to provide training and support.

For some time now, there has been debate about whether or not the United States should come to Taiwan’s aid if China were to invade. Blake Herzinger, writing in Foreign Policy, argued that to abandon Taiwan would make “zero moral or strategic sense,” and that there is “no case for ditching a long-time democratic ally.”

Others, such as Charles Glaser of George Washington University, wrote in Foreign Affairs that, given the catastrophic risks of a possible nuclear war, retrenchment would be a better option. By ending its commitment to Taiwan and scaling back “its opposition to China's assertive policies simply to avoid conflict,” Washington would lower the “odds of a crisis or going to war over secondary or tertiary interests” such as Taiwan.

Emma Ashford of the Atlantic Council goes further, asserting that “Taiwan’s strategic significance to the United States is not even remotely enough to risk a war with China.” She wrote that while countries such as Japan and South Korea are worth defending, the “imbalance in interests and capabilities is just too high.” Interestingly, a recent poll by the Chicago Council on Global Affairs shows that just over half of Americans are in favor of using U.S. troops to defend Taiwan should China invade.

Clearly, there is no consensus on whether or not Taiwan is worth defending. But what if we were to analyze the scenario retrospectively; to “reverse engineer” a successful Chinese invasion of Taiwan, as it were. What would the consequences of a successful seizure of Taiwan look like for China? What further strategic objectives might it have? What might those answers reveal about the value of defending Taiwan?

First, China will have succeeded in sealing off the South and East China Seas. Indeed, this is both a predicate and a consequence. A successful seizure of Taiwan means that China will have established control over its claim to the nine-dash line in the South China Sea. Moreover, it will not only have blockaded all of the approaches to Taiwan, but will also have established air and naval superiority in the region. Most significantly, it will be able to use Taiwan as a point of departure for further military objectives. General Douglas MacArthur once referred to the island in the hands of communists as “an unsinkable aircraft carrier and submarine tender”.

Second, China knows it has unfinished business with Japan. From an economic perspective, China and Japan are Asia’s largest trading partners. As Japan’s largest trading partner, China is a critical source of growth for Japan’s economy. More than exports, no other country has sent more students, tourists, and workers to Japan than China. However, economic interdependence does not mean that historical grievances have been forgotten. Japan’s Twenty-One Demands, the Rape of Nanking, and memories of Unit 731 may be historical footnotes in the West. But they cast a long shadow over Chinese historiography.

Japan is well aware that if China seizes Taiwan, there would likely be a reckoning. While security cooperation between the United States and Japan makes a Chinese attack against Japan unlikely, China’s control of Taiwan and the East and South China Seas would require rerouting the shipping of strategic resources to Japan around the Malacca Strait and the South China Sea. Japan is almost entirely dependent upon crude oil imports from the Middle East shipped through the Malacca Strait into the South China Sea, through which it also receives a significant amount of its liquified natural gas. Maritime shipping forced to detour around the Strait through the Philippine Sea would mean a significant impact to both the Japanese and South Korean economies. Worse, with Taiwan firmly under Beijing’s control, there is no guarantee that maritime shipping to and from Japan would even be secure.

Finally, Taiwan’s fall to Communist China would mean a direct threat to the United States as well as its interests in the Western Pacific. This is a security concern that dates back to the end of World War II, when MacArthur warned Congress in 1951 that “as a matter of military urgency, that under no circumstances must Formosa fall under Communist control. Such an eventuality would at once threaten the freedom of the Philippines and the loss of Japan and might well force our western frontier back to the coast of California, Oregon, and Washington.”

This is a well-documented historical objective that dates all the way back to the end of World War II. Declassified CIA National Intelligence Estimates from 1951 indicate that Beijing’s objective was “eliminating Nationalist Chinese [i.e., Kuomintang in Taiwan] and Western power from China and contiguous territories as rapidly as possible” and aiming at “the final victory of world communism and at Chinese leadership of a Communist Far East” with the support of the Soviet Union. As a closet Maoist, Xi Jinping very likely has these same strategic objectives for Communist China today.

Crossing the Strait By Feeling the Stones

China’s objective of seizing Taiwan, by force if necessary, is only one step in Beijing’s strategic objective of pushing American and Western influences out of Asia altogether. Policymakers trying to decide whether or not Taiwan is worth defending must look beyond the discrete values of defending a democratic ally. The defense of Taiwan is the first step in maintaining stability in the region and, critically, defending the United States against a Communist Chinese advance in the Western Pacific. Put another way, the question of whether or not Taiwan is worth defending is really a question of whether we want to pay now, or pay later.

Joey Wang is a defense analyst in Washington, D.C. An alumnus of the Kennedy School of Government at Harvard University, he is also a graduate of the U.S. National Defense University and the U.S. Naval War College. The views expressed in this analysis are his own.