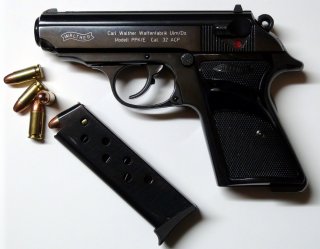 Despite what the James Bond movies may have you believe, spies don’t often wear tuxedos nor do they likely spend their time in casinos. And few spies today would use a Walther PPK—a gun that was developed when current Bond Daniel Craig’s grandfather might have been a young man.

There were plenty of “secret” guns that spies have employed over the years, but usually it wasn’t a weapon concealed in a camera such as the kind 007 was once issued.

Rather than a pocket pistol like the PPK, members of the British Special Operations Executive (SOE) in World War II were equipped with the Welrod. Made by the Birmingham Small Arms Company, it was a suppressed pistol that fired a .32 ACP round. It operated like a bolt action rifle and wasn’t quick to operate—but it was meant to be far quieter than other firearms of the era. The internal suppressor successfully quieted the gun to around 73 decibels, so not exactly the super quieting silencer that is seen in movies and TV shows but still enough to keep from drawing too much attention.

The Welrod wasn’t the only secret weapon used by the SOE during WWII. There was also the Sleeve Gun, which was developed by Station IX. It was basically a Welrod pistol but without the pistol grip. Produced in both .32 ACP and 9x19mm, its effectiveness was quite questionable. It was difficult to aim and had a range of just nine feet.

The U.S. Office of Naval Intelligence (ONI) also had a spy weapon up its sleeve—or more accurately in its grip. It was the Glove Pistol, which also lacked in range. To fire the glove the wearer had to make physical contact with the suspect—with the plunger pushed against the target’s body, which would fire point blank. About the only benefit of such a weapon was that both of the user’s hands would be free and the target wouldn’t even know the attacker was armed. Of course, if you can get that close why not use a knife or other weapon?

This one might sound like something hunters would want to use, but in fact it was developed by the CIA as an affordable (cheap) weapon to be supplied to anti-communist insurgents. The Deer Gun as it was known was a cast aluminum framed pistol with just a 1.8 barrel. While the ammunition could be stored inside the handle, the weapon had no action. Instead, 9x19mm rounds were loaded manually into the breach and it was cocked by pulling back on a simple cone-shaped charging handle at the rear of the barrel. There were no serial numbers or anything else that could identify it as coming from America, while rounds were simply marked 9mm 42—as to suggest it was surplus WWII ammo. The CIA seemed to think of everything, except that the range was terrible and the weapon was about as ineffective as it sounds.

Of the 1,000 or so that were produced, fewer than 150 may have been sent to Vietnam, while most were scrapped. Only around two dozen of the $3 guns are known to exist and one sold at auction for $22,000 in 2014. If only the CIA had such return on investment with all of its projects.

While it sounds like something out of movie, the KGB-issued “lipstick” gun did really exist. It wasn’t technically a “kiss of death” however, but rather was a tube—meant to resemble an ordinary tube of lipstick—which secretly contained a single 4.5mm bullet. The weapon was operated by twisting the tube. As with many other “spy weapons” it wasn’t known to be very accurate and it is likely no one was actually killed with one.

Another weapon that seems out of fiction was actually developed in the early twentieth-century, but it took until the Second World War for the Office of Strategic Service (OSS)—the precursor to the CIA—to develop the effective “Stinger,” a pen that fired a small .22 caliber round. A single-shot weapon, it proved cumbersome to cock and fire, while it was suggested it be operated from a concealed location. About the only thing this one had going for it was that it could be hidden in plain sight.