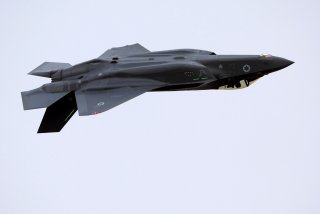 The number of women who have flown the Lockheed Martin F-35 Lightning II Joint Strike Fighter remains small, and all have been Americans.

But now twenty years after the first woman took to the skies as Israel's first combat pilot, a female pilot will join the ranks of the 116th "Lions of the South" Squadron and fly the F-35i Adir variation of the aircraft.

By November the Israeli Air Force (IAF) will have 27 operational of the planned 50 aircraft that will make up two full squadrons by 2024. In May 2018 the IAF first announced that its F-35i fighters had been used on two combat missions over Beirut.

The Israeli female pilot, who wasn't named by The Jerusalem Post, will be expected to fly in similar combat missions with her fellow IAF pilots once she gets her wings later this year.

Upon its independence and recognition by the UN, the Israeli military became the first in the world to introduce mandatory military service for both men and women, and it was in 1951 that Yael Rom became the first female graduate of Israel's prestigious pilot course.

However, soon afterward the women were barred from combat positions including fighter pilots.

That changed in 1993 after South African immigrant Alice Miller successfully sued the military after being denied the right to enlist in the IAF. While Miller was still declared medically unfit to serve as a pilot, that broke the glass ceiling in the IAF, and in 2000, Lt. Roni Zuckerman, a granddaughter of two leaders of the Warsaw Ghetto Uprising, became the first woman to graduate as a combat fighter pilot, The Jerusalem Post reported.

Several women have already flown the F-35, and then Air Force Lt. Col. Christine Mau has the distinction of being the very first woman to fly the fifth generation stealth fighter in 2015 after previously flying F-15 jets. Mau had previously participated in the first all-female combat sortie during a deployment to Afghanistan in 2011 during an air support mission for coalition and Afghan forces.

As for flying the Joint Strike Fighter in combat, that distinction goes to Air Force Capt. Emily "Banzai" Thompson, who had actually never conducted a combat sortie before being deployed to Al Dhafra Air Force Base in the United Arab Emirates.

In June, she became the first female pilot to fly the F-35A Lightning II in combat.

On the day of the first combat sortie, which has not been publicly disclosed, Thompson's all-female maintenance crew launched her off for the historic flight.

"This is my first deployment," Thompson said in a statement.