History's Mysteries: Elephants Could Have Fought For The Union In The Civil War 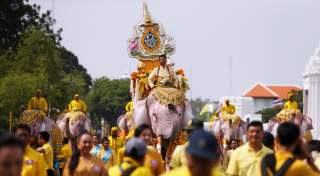 Key point: Would it have welcomed further foreign interference?

In 1862, the King of Siam offered President Lincoln war elephants for the Civil War. Lincoln politely declined. But what if he hadn’t?

The long, low lines of white pup tents, punctuated by the larger A-frame and conical Sibley tents of the officers, marked the beginning of the camp of the 1st Brigade, 1st Division, I Corps, Army of the Potomac. Fires were already dotting the landscape as the soldiers began the process of recovering from the day’s march. The smell of coffee began to drift across the still Pennsylvania night air.

All five regiments of the brigade – the 2d, 6th, and 7th Wisconsin, the 19th Indiana, and the 24th Michigan – were in bivouac, having made a hard march that day through the hot dust of the June roads. They were awaiting the one remaining battalion of their brigade, one that had been newly added just in the months prior and had yet to see action. The veterans of South Mountain and Brawner’s Farm were looking forward to seeing what the greenhorns of the 198th Ohio Mounted Infantry Battalion would do when they first “saw the elephant,” the Civil War term for experiencing combat for the first time.

Brigadier General Solomon Meredith stood with his frock coat unbuttoned outside his tent, airing out his tall frame from the long march. He commanded this brigade, nicknamed the “Iron Brigade” for its ferocity on the battlefield. The only all-Midwestern brigade in the Army of the Potomac, the Iron Brigade had a reputation as the toughest unit of the lot. Meredith was staring down the road, waiting impatiently for his last unit to arrive. The form of Colonel Rufus Dawes, commander of the 6th Wisconsin, hove into view. The two exchanged pleasantries and Meredith asked Dawes how his Badgers were doing.

“I think we all are,” said Meredith. “And from what I hear, we’ve got some fine new troops to help us out. Some of your Ohio fellows are on their way.” Dawes, originally from Ohio, smiled, and assented that there were no finer troops in the Union. His smile faded somewhat as, out of the gloom, the sound of thunder could be heard.

“Do hope it won’t rain on the boys,” he said. Meredith shifted his booted feet uncertainly.

“No, colonel, that isn’t rain, I don’t reckon,” he said. “That would be the 198th Ohio Mounted Infantry Battalion.”

“Jiminy!” said Dawes. “Are they giants?”

They were interrupted by a scream from the picket line, a wild gunshot fired into the night air, followed by the sight of the picket guard running in, faces pale, gibbering that the world had come to an end. Dawes scrambled for his sword but Meredith told him not to bother.

“Watch,” he said, gesturing down the road.

A massive bulk appeared in the firelight, flames casting its shadow ominously onto the roadway, as the sound of stamping feet echoed for a mile behind it. Two large ears flapped with unconscious gravity while a long proboscis-like nose reared skywards and unleashed a braying blast, which was echoed rearwards – echoed with surprisingly regularity, almost as if it were the call for a halt. Mounted on this beast’s back was a tall, thin man in the blue of the U.S. Army.

Nothing could compare to the gapes and stares that confronted the 1st Ohio Pachyderms as they marched into their campsite alongside the Iron Brigaders. Nothing of their like had ever been seen before in North America or in the U.S. Army. As Major Custer sat his elephant alongside the road, the companies marched by. Ten men per beast perched in towers atop their gray backs, M1863 Springfield rifled muskets poked out of loopholes and crenelations in the towers. Some towers bore a small mountain pack howitzer to add to the firepower; one per company. As for the beasts themselves, they all wore padding over their front, sides, and heads, designed to provide some basic protective armor.

The night was filled with the sounds of braying and stamping feet, as the elephants were bedded down, as best as could be done on this hot June night. They needed more water than the countryside could provide, explained Custer, and this, as well as providing forage, had been the main issues that they had encountered in their training. They had been the gift of the King of Siam back in 1862, offered to President Lincoln as a gift. Not wanting to be rude, Lincoln had accepted them. Stanton, a good son of Ohio, immediately found a way for them to go to his home state. Tom, then in the cavalry, had been offered a commission, and here they all were.

Meredith continued to silently stare, as if willing his mind to believe what he saw. He finally shook it off and asked, “Are you any relation to the George Custer with the cavalry?” Major Custer blushed, and said yes, that was his older brother, and that he owed him very much for putting in a good word for him to get this command. Meredith said that he thought the family fighting spirit would be a good addition to the brigade, and told Custer to get some sleep.

Bugles rang well before dawn. Reveille was echoed from the elephants on picket duty. The brigade broke camp swiftly. Orders had come down from Corps headquarters to begin movement early, based on a request from a cavalry division from somewhere near the town of Gettysburg. As the early morning sun brushed the trees, the Iron Brigade was on the march northwards. The newcomers had fallen in like veterans and were posted in the advance guard of the 1st Division. In the daylight, the rest of the brigade could see that the 1st Ohio Pachyderms were already wearing the frock coats and tall black hats that gave the brigade their distinctive look.

A message rider flew down the road from Gettysburg, almost lost his mind at the sight of the elephants, but managed to regain his composure long enough to hand Meredith a message requesting him to proceed with all haste: Buford’s cavalry division had engaged Confederate infantry divisions and needed support at once. The band of the 6th Wisconsin struck up “The Campbells are Coming,” which was soon drowned out by the braying of elephants, much to the annoyance of the musicians. Meredith rode up to Major Custer.

“Major, I need you to move with all possible speed to Gettysburg,” he said, looking up at him. “We will follow close behind, but General Buford needs everything that can be spared, and your noble beasts will get their soonest. Report to him and go where he sees fit.” Custer saluted and then turned to the following columns of his troops: “At the double, march!” In a slow but ever increasing rumble, the column moved forward at a pace that did not seem quick, but soon left the infantry far behind. The following troops cursed the dust and the massive elephant droppings that they had to dodge.

Amidst the shot and shell of the battlefield, Major General John Buford viewed the actions of his troopers from the cupola of the Lutheran Theological Seminary. His grim mouth was set hard – his embattled horse soldiers could not hold on much longer if those thick lines of Rebel infantry kept coming on. Suddenly an aid shouted, “Sir, it’s General Reynolds!” Buford spun around in the cupola and fixed his glasses on the road. There, indeed, was Reynolds, commanding the I Corps, riding up with his staff. And behind him he could see…something. A cloud of dust and a flag and….were those ears?

“What goes, John?” asked Reynolds, reining up at the building.

“There’s the devil to pay,” said Buford, hoarsely, still glancing down the road at the quickly approaching dust cloud.

“Can you hold?” asked Reynolds.

“I reckon I can, but, Christ, John, what in the devil is that?” said Buford, staring in wonderment as the 1st Ohio Pachyderms now fully came into view, colors flying proudly.

“New kind of Iron,” muttered Buford, but went below with Reynolds.

Amidst the crackle and pop of the cavalry carbines, Reynolds and Buford rode onto McPherson’s Ridge.

“Who’s that forming in the woods?” asked Reynolds.