Hitler Wanted A Massive Battleship Fleet, But Why It Didn't Happen May Surprise You 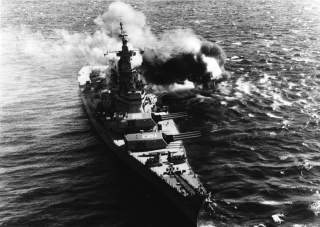 In the end, all fourteen transports in convoy JW-51B made it to Russia with their valuable cargoes. News of the defeat was slow to reach Hitler because of a miscommunication: a message that “the sky was on fire”—a reference to the Aurora Borealis—was interpreted by Raeder as news that the convoy was on fire. Hitler announced the total destruction of the British convoy on his New Year’s Day radio address, and only learned the truth the following morning from the BBC. Enraged, he summoned Admiral Raeder for a meeting at his “Wolf’s Lair” redoubt.

There, Raeder was treated to an hour-and-a-half-long rant about the worthlessness of the German Navy, which would have put the famously memed scene in the movie Downfall to shame. German sailors were cowardly, incompetent and disloyal, Hitler raged—only the submarine branch had achieved anything of worth in either World War. Hitler’s own role in encouraging the German captains to withdraw in if they encountered significant opposition was overlooked. Fuming, he ordered Raeder to scrap all of the Kriesgmarine’s thirteen capital ships for the metal, their guns repurposed to serve as coast artillery.

Admiral Raeder, who had been building up the Kriegsmarine for more than a decade, tendered his resignation rather than follow the order. Appointed in his place was Adm. Karl Dönitz, a submariner who had long criticized the resources expended on the surface fleet. However, even Dönitz insisted that it would be foolish to scrap vessels for minimal economic benefit. The warships could prove useful even if they never left their ports.

Dönitz was right—the mere possibility of a German battleship sortie forced the Royal Navy to devote disproportionately large forces in reserve just to protect against the threat. This is a strategy known as having a “fleet in being.” Even if the Germans couldn’t use their surface fleet, they could tie down British forces and constrict their strategy with the threat that they might use theirs if the British let down their guard.

Hitler’s orders nonetheless had consequences. Nazi Germany did not commission a single additional capital ship for the remainder of World War II, and a refit of the battleship Gneisenau was abandoned halfway through. Many sailors were reassigned to serve in naval infantry divisions. The Kriegsmarine attempted only one more capital ship sortie, which ended with the sinking of the battleship Scharnhorst.

Dönitz would ultimately assume leadership of what little remained of the Third Reich after Hitler’s suicide, and saw to its surrender to the Allied powers. Raeder, his former superior, never forgave Dönitz for taking his place, and even testified against him at the Nuremberg tribunal. As for Sherbrooke, the wounded captain of the Onslow, he received the Victoria Cross for his bravery, rose to the rank of rear admiral, and was later appointed high sheriff of Nottinghamshire.

The fog of war—and snow squalls and smoke!—spoiled what otherwise was a well-conceived ambush by the German cruisers. The skill and gallantry of the outgunned British destroyer crews, and risk aversion of the German captains, also played their part. Due to Hitler’s vindictive and wrathful nature, he was unable to recognize his own responsibility in a minor military setback, and instead lashed out at his men for following his orders all too well.