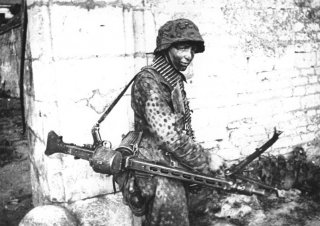 The MG 3 machine gun’s origins are firmly planted in World War II, with the Nazi German war machine. During that war, the MG 3’s predecessor, the MG 42, struck terror into the hearts of the Allies. Known informally as “Hitler’s Buzzsaw” the MG 42 was renowned for its blisteringly high rate of fire, which clocked in at 1,200 to 1,500 rounds per minute.

The MG 42 was a crew-served weapon, meaning that unlike most modern machine gun systems, a two-man crew operated the rifle: a gunner as well as an ammunition carrier and backup gunner. The machine gun was produced in very high numbers and served in a variety of roles, both with the German infantry as well as on vehicles and in a slightly modified form for use as an anti-aircraft gun.

After the German capitulation in May 1945, production of the machine gun didn’t resume until the late 1950s, when Rheinmetall produced the MG 1 for the reformed German Army, the Bundeswehr. Outwardly, the two machine guns were widely similar. The most significant difference between the two is the MG 1’s chambering, from the German Imperial 7.92×57mm Mauser cartridge to the somewhat smaller NATO-standard 7.62x51mm. World War II-era MG 42s still in West German stocks were also rechambered for this cartridge. The design was later slightly modified and is known as the MG 3.

Compared to the original design, the newer machine guns are capable of both a similar rate of fire, as well as a lower 800–950 rounds per minute with the help of a heavier both and different recoil springs.

Despite this modification, however, sustained fire is strictly avoided and gunners are instead instructed to fire three or five-round bursts so as not to overheat the barrel. Still, the MG 3 comes with a replacement barrel, carried by the assistant gunner which is periodically changed out with the help of a heat-resistant glove.

Compared to some more modern general-purpose machine guns, the MG 3 family is relatively heavy, tipping the scales at more than twenty-five pounds. It is also quite long, partly thanks to its barrel, which is more than twenty-two inches long. Though a boon to the machine gun’s range, it is certainly not an advantage to urban combat scenarios where ease of maneuver is more valuable than maximum range.

The MG 3 has been very widely exported to a number of countries in Europe, Latin America, and the Middle East, where it is prized for its accuracy and reliability. Despite its advanced age, the German design survived a World War—and just won’t quit.