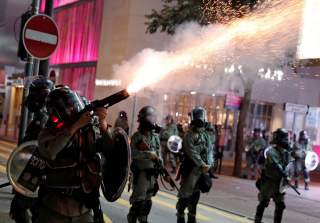 Key point: Carrie Lam’s may have finally killed the extradition bill, but it is too little, too late. Many of the protestors have become radicalized due to police violence and will not be satisfied.

It's the announcement Hong Kong's protesters were waiting for — three months ago. In an effort to quell the city's protests, Hong Kong Chief Executive Carrie Lam formally declared on Sept. 4 that she was fully withdrawing the controversial extradition bill that initially sparked the city's protests in early June, marking a sharp turn after she steadfastly refused to do anything but suspend the motion. Lam made the decision as part of a four-part action plan, which also includes an independent study on the "root cause" of the protests, as well as greater engagement with citizens.

But Lam's final proposal — to "fully support" an investigation into police conduct under an existing independent police complaint council — evades one of the protesters' primary demands for an independent inquiry. What's more, she didn't address other major demands, including amnesty for detainees, a retraction of her definition of the protests as a "riot" and the implementation of universal suffrage — a politically sensitive topic. Ultimately, Hong Kong's protests have escalated so far beyond the initial demand for the permanent withdrawal of the extradition bill that Lam's effort to subdue the demonstrations with her declaration is simply too little, too late. Even if the city manages to escape further escalations and a harsher crackdown, the long-running crisis has deepened scars in the city and widened gaps with China, making further flare-ups likely and jeopardizing Hong Kong's position as Asia's most prominent financial hub.

The extradition bill was the least sensitive of the protesters' demands, meaning Lam could have appeased more moderate demonstrators if she had formally withdrawn the bill sooner. But the subsequent escalation between protesters and police, as well as the government's perceived ineptness at handling the situation, has greatly raised the stakes, making a possible settlement a much dimmer prospect. Indeed, the fact that Lam's government refused to accede to the demand for an independent police inquiry — a plea that has wide public support — out of fears of hurting police morale means that her efforts are unlikely to appease many in the movement, let alone the more radical protesters. Indeed, the decision has drawn sharp criticism from some student protesters, who described it as a smokescreen. In the meantime, the continued standoff between protesters and authorities in some districts has highlighted the tenuous nature of the city's peace.

Nevertheless, the decision will have some mollifying effect on the unrest, particularly as the more radical and student protesters will face greater challenges to retain support from the wider populace because of the severe disruptions their tactics, which include trying to bring the airport to a standstill, have caused Hong Kong. Nevertheless, if some calm is to return, the city's government will surely need to expand its confidence-building efforts and reform proposals to encourage more protesters to abandon the streets. At least in the short term, many protesters might feel compelled — or even emboldened — to intensify their pressure against the government to meet their demands in full. But given how long it took Lam's government to make even a small compromise, the chances that it will offer additional concessions are less and less likely, making continued escalation likely in the weeks ahead, particularly as the symbolic day of Oct. 1, China's National Day, approaches.

The Deeper Issues at Play

Even if Lam's announcement takes the wind out of the protests' sails, restoring some calm to the city and eliminating the prospect of a harsher local crackdown or Beijing's intervention, authorities can no longer easily bury the deeper political and socio-economic grievances that the protests have brought to the surface.

Chief among these grievances is Beijing's stricter policies toward the city. Essentially, as Beijing seeks to integrate the territory via economic and cultural means, eroding local autonomy in the process, many Hong Kongers fear the central government will abandon the "one country, two systems" framework before the scheduled date of 2047, transforming Hong Kong into just another ordinary Chinese city. Even so, Beijing certainly has an interest in preserving Hong Kong's special economic and financial status as a critical link with the outside world. Indeed, roughly two-thirds of foreign investment that goes to or from China passes through Hong Kong; in fact, the city's importance as a re-export hub under a special tariff regime has arguably increased amid China's trade war with the United States. The city is also home to 70 percent of mainland Chinese companies' offshore initial public offerings, 60 percent of its overseas bonds and a prime offshore depository for yuan (the city currently holds two-thirds of all overseas yuan). But as the city’s economic share in China's overall gross domestic product continues to decline and as Beijing, Shanghai and even next-door Shenzhen have begun to eclipse the city economically in size, the central government seems more willing to grab tighter control over Hong Kong ahead of the end of the 50-year transition period in 2047.

In addition to heightening fears about Beijing's intentions, the central government's creeping influence has also incited antagonism against new arrivals from the mainland — whom many locals blame for threatening the city's core values and contributing to Hong Kong's soaring property prices and rising inequality. These factors have fostered the emergence of Hong Kong's nativist movement, a disparate array of mostly young people who grew up with much less connection to the mainland and have sought to defend the city's democracy and freedom at all costs. Particularly after the largely peaceful "Occupy Central" and "Umbrella Movement" failed to convince Beijing in 2014 to permit universal suffrage ahead of Hong Kong's 2017 chief executive election, more radical elements in the group began advocating a different approach, taking inspiration from protests like Ukraine's Euromaidan uprising in 2014 and France's yellow vest protests at the end of 2018 in the belief that more strident tactics, like blockading roads and disrupting the airport, were necessary to effectively oppose Hong Kong's undemocratic administration and China's authoritarian regime.

A Permanent Lack of Solutions?

Simply put, the democratic goals of Hong Kong's leaderless protest movement threaten Beijing's very control over the territory, leaving little room for compromise and de-escalation — short of the protests dying down or an overwhelming government crackdown. The current unrest will almost inevitably harden the central government's views on the city, especially given its worries about the potential links between the protesters and outside forces. For instance, Xu Luying, a spokeswoman for the Hong Kong and Macau Affairs Office, has called for the reintroduction of a bill to implement the mainland's standard national curriculum in Hong Kong; at the same time, plans have reportedly surfaced about placing more centralized power in the hands of the city's chief executive. Unsurprisingly, any such push by Beijing to bring the territory closer into its grip will reignite vociferous protests, regardless of a possible lull as a result of Lam's formal withdrawal of the extradition bill. And even if Beijing avoids these highly controversial proposals, hostility toward China will continue to well up among Hong Kongers so long as the central authorities make incremental moves to integrate the city.

Whatever the outcome of the current crisis, Hong Kong is likely to be significantly altered. Even before the crisis, the city was suffering because of China's slowing economy and the trade war; since the unrest has started, the city has witnessed huge losses to its all-important tourism and service industries (both of which account for roughly 90 percent of GDP). A harsher crackdown would hurt the city much more. At the same time, the city's position as a leading financial hub relies, partially at least, on relative political neutrality. But as the city's political and ideological polarization deepens, it could threaten the city's business environment in the long term as the region's competition for capital intensifies further. What's more, the antagonism toward Beijing that will stem from such polarization will inevitably lead Beijing to increase support for mainland cities, such as Shanghai and its trade zone or Shenzhen, to compensate for Hong Kong's unreliability even as the city will remain a critical link for the foreseeable future.

In the end, Hong Kong recovered from the (relatively peaceful) unrest of 2014 to maintain its importance within the international financial system. But after five years, and the accumulation of many more grievances beyond authorities' actions over the past three months, Hong Kong might have traveled too far down the path of polarization for the city to retain its lofty perch as one of East Asia's preeminent financial hubs. Such an outcome will obviously hurt Hong Kong — but also Beijing.

Hong Kong Reaches a Point of No Return is republished with the permission of Stratfor Worldview, a geopolitical intelligence and advisory firm.