From Hong Kong to the Trade War, China's Leaders Have Terrible Choices Ahead 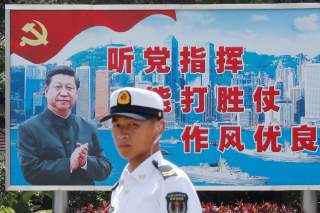 Unlike past economic crises, though, the issue this time around won't be the scope of the damage itself, but rather how that damage is perceived by the country's now wealthier population — and whether that perception leads to a significant backlash against the government.

Nearly 70 years after its founding, China has once again found itself at a historic crux. As Beijing's rivalry with the United States grows increasingly hostile, its future relations with Hong Kong hang in the balance — all while the country grapples with an economic slowdown that risks blunting 30 years of unrestrained expansion. Suffice it to say, China's political leaders had their plates full when they gathered in Beidaihe this year for their annual meeting, which reportedly just wrapped up.

But while China has faced similar internal threats over the decades, its leaders are unlikely to find answers in precedent this time around. And that's because the economic and political challenges the country faces today are occurring in a vastly different domestic context. Any speculation or leaks from this year's summit won't cover all the solutions to the complex challenges Beijing's leaders now face both at home and abroad. But any decision made behind closed doors during the summer retreat could very well dictate not only China's trajectory in the coming decade but also the rest of the world's.

The U.S.-China trade war — punctuated by a cycle of negotiation, truce and retaliation — recently entered its 18th month. Since the last round of talks broke down in late April, Beijing has notably hardened its negotiating position. China, for example, has frozen its purchases of U.S. agricultural goods until Washington extends export licenses or reduces controls on the Chinese tech giant Huawei Technologies. But such a stringent position risks further escalating the trade war — the effects of which have already taken a sizable toll on China's domestic economy. This raises the question of whether Chinese leaders will be able to maintain their tough stance without exacerbating the country's economic slowdown.

Even with the trade war bubbling in the background, the unfolding situation in Hong Kong undoubtedly garnered its share of attention in Beidaihe. Protests — drawing anti-government demonstrators and members of radical and more violent cells to Hong Kong's streets — have entered their third month with no immediate end in sight. The demonstrations, sparked by the city's now-tabled extradition bill, have evolved into a symbol of Hong Kong's anxiety over deepening economic and cultural integration with China, mixed with antagonism over Beijing's tightening political influence there.

That said, the prospects of seeing an independent Hong Kong in the near future remain unlikely. But the ongoing protests nonetheless risk undermining the city's 50-year transition under China's one country, two systems policy. At the bare minimum, Chinese leaders will have to figure out some sort of short-term solution to quickly de-escalate the volatile issue — ideally before the People's Republic of China celebrates its 70th anniversary on Oct. 1. But the high-profile and unrelenting unrest will also continue to pose critical questions about what red line must be crossed before Beijing ultimately takes matters into its own hands and directly intervenes.

Compared with other eras, China's current economy is in much better shape. After all, both the massive push to reform state-owned sectors in the late 1990s and the global financial crisis in 2008 put tens of millions of Chinese citizens out of work. And even the most pessimistic estimates project that the costs of the current trade war will pale in comparison to those inflicted by post-1989 international sanctions, which virtually isolated China from Western economies for more than a year.

Unlike past economic crises, though, the issue this time around won't be the scope of the damage itself, but rather how that damage is perceived by the country's now wealthier population — and whether that perception leads to a significant backlash against the government. China's economic transformation over the past 30 years has made its citizens more affluent, on the whole, than they've ever been. But that also means they'll be much less tolerant of any disruptions of the lifestyles to which they've grown accustomed. Thus, should China's economic slowdown start to directly affect jobs and pocketbooks, it could increase the likelihood of social instability — particularly in the country's urban and coastal economic hubs — by bringing brewing political grievances to the surface.

Beijing's tougher stance in trade talks could risk making that a reality by drawing further retaliation from the United States — something Chinese leaders surely want to avoid. But at the same time, with their global rivalry only set to grow, Beijing's current position against Washington could very well set the tone for how the country will be perceived — and positioned — as international power shifts in the coming decades. And thus, the Chinese leadership will hesitate to let down its guard for fear of appearing weak against the United States.

China's political leaders have always been highly sensitive to perceived external threats, even when internal challenges linger. This mindset likely stems from an astute understanding of the difficulties that come with ruling such a geographically massive and socially diverse country whose position also makes it uniquely vulnerable to outside influence.

There's a chance, then, that Beijing will bet on its authoritarian strength and still-intact nationalist support to give it room to maintain its hard line against the United States. But with more U.S. tariffs set to take effect Sept. 1., and more trade pressures likely to follow, there's also only so much more that the country's already cooling economy can absorb before the repercussions start to generate greater domestic problems.

Meanwhile, China's economic slowdown is propelling its leaders to diversify trade routes and develop new financial footholds in more remote regions of the world. Combined with the subsequent risk of domestic social instability, this outreach will compel Beijing to grasp its buffer regions even tighter.

This could increase the likelihood of Beijing intervening in Hong Kong's political crisis, should the situation continue to escalate before the national day in October. But in the longer term, it also means that Beijing will likely further tighten its already heavy security and surveillance regimes along its Western periphery. For decades, China had pursued a much more hands-off approach to Tibet and Xinjiang's incremental assimilation. But the need to develop its peripheral states amid economic restructuring has worn Beijing's patience thin — hence its decision to pursue a more ruthless and discriminatory approach in recent years, including the establishment of re-education camps. And as external and internal threats continue to rise, ensuring that these two historically restive buffers remain firmly under control will become all the more important to Beijing.

The measures Beijing takes in response to these challenges will undoubtedly have significant implications for China and elsewhere. And as a result, the importance of this year's Beidaihe summit has been elevated. For decades, the rumored policy and personnel decisions made at the private gathering have closely intertwined with the country's political path. Many of its key national strategies — including the Great Leap Forward, the hallmark economic and social campaigns of the Mao era — had their genesis at Beidaihe.

Over the intervening years, the annual meeting had become more of an informal forum. But at a time when so much affecting China's future remains in flux, the world will be waiting with bated breath to see what decisions the elite leaders made to respond to the myriad challenges that lie at their feet.

A Decisive Moment for China Draws Nigh is republished with the permission of Stratfor Worldview, a geopolitical intelligence and advisory firm.