Hope Hicks Is Back as a 'Senior Counselor' to President Trump 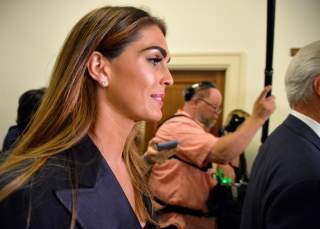 The White House announced today that Hope Hicks will be returning to the administration as an aide to Jared Kushner and senior counselor to President Trump. This is after an almost two-year absence where she worked as an executive vice president and chief communications officer at Fox News. Hicks is expected to start in March.

Prior to 2015, Hicks had no experience in politics. She performed public relations for Ivanka Trump’s fashion line and promoted Trump-brand resorts. Then, in January of that year, she was ushered into Donald Trump’s office, one floor up from her workspace in Trump Tower. “Mr. Trump looked at me and said, ‘I’m thinking about running for president, and you’re going to be my press secretary. I think it’s ‘the year of the outsider.’ It helps to have people with outsider perspective,’” Hicks recalled to New York magazine in 2016.

Hicks served as press secretary for the remainder of Trump’s successful campaign, acting as a gatekeeper for media requests. In August 2017, she filled a vacuum to become the White House Director of Communications, a position she departed In March 2018.

“She was unassailable in terms of her relationship with the president; and no one even tried,” an official told Jonathan Swan of Axios at the time. “She’s one of the very few people here that you could say without fail had the best interests of the president at heart. She was a true believer, not an ideologue, but a true believer in Donald Trump.”

Hicks’ longtime relationship with the president, her distaste for the limelight, and her loyalty to his campaign agenda made her a popular figure among national conservative influencers. There were recommendations that Hicks should have replaced John Kelly as Trump’s Chief of Staff, including by Ann Coulter. The announcement of her return has received numerous plaudits from this crowd.

The original reason for Hicks leaving the administration was her unhappiness with Washington life, including national focus on her private life. She has had relationships with both Corey Lewandowski, Trump’s original campaign manager, and Rob Porter, the White House staffer who resigned amongst domestic abuse allegations. When Hicks testified in front of the House Judiciary in June 2019 regarding the Mueller report, Chairman Jerrold Nadler (D-NY) repeatedly addressed her as “Ms. Lewandowski.” She corrected him and he apologized.

There is speculation that Hicks’ return is part of a move to reinstate loyal officials now that impeachment is over.

“There is no one more devoted to implementing President Trump’s agenda than Hope Hicks," Jared Kushner, who she will ostensibly be working under, said in a statement. "We are excited to have her back on the team."

Current White House Press Secretary Stephanie Grisham referred to Hicks as “one of the most talented and savvy individuals I have come across.”