Hospital Ship to the Rescue: The U.S. Navy’s ‘Comfort’ Heads to New York City for Coronavirus 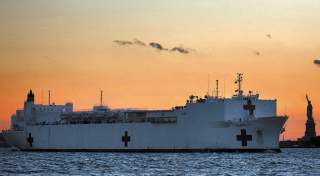 U.S. Military Sealift Command has activated both of its giant hospital ships and is deploying one each to the East and West Coasts in order to help the local hospital systems cope with the rapidly-spreading coronavirus epidemic.

New York governor Andrew Cuomo on March 18, 2020 told reporters that the White House had committed to sending USNS Comfort -- which normally resides at a pier in Norfolk, Virginia -- to New York City Harbor. Comfort’s sister ship Mercy, normally a resident of San Diego, will deploy along the West Coast.

“It’s an extraordinary step, obviously,” Cuomo said. “It’s literally a floating hospital which will add capacity, and the president said he would dispatch that immediately.”

Preparations to deploy the vessels, which are crewed by MSC’s civilian mariners, began on March 17, 2020, U.S. Defense Secretary Mark Esper said. “We’ve already given orders to the Navy … to lean forward in terms of getting them ready to deploy.”

Comfort and Mercy are former tanker hulls that the Navy converted into hospital ships during the 1980s. Each 894 feet long and displacing 66,000 tons of water, they easily are the biggest hospital ships in the world.

Designed to care for U.S. Marine Corps casualties during a bloody beach assault, Comfort and Mercy primarily are trauma hospitals. They boast 12 operating rooms and a thousand beds, including 80 beds in the intensive-care ward. Staffed by up to 1,300 military and civilian doctors, nurses, orderlies and crew, they can support major surgeries and treat burns and other injuries.

But the ships are not optimized for long-term care of patients suffering from a respiratory disease such as coronavirus. So instead of taking on coronavirus patients, Comfort and Mercy will handle other patients, freeing up space in civilian hospitals so they can devote more of their own resources to the pandemic.

Coronavirus, which originated in China in late 2019, manifests with flu-like symptoms but is much more dangerous than the flu is and is particularly lethal to the elderly and people with compromised immune systems. It’s unclear how many people have died of the virus, but the number could be more than 10,000.

New York so far is one of the major centers of coronavirus infections in the United States. As of March 18, 2020, the state had reported more than 2,000 cases. Owing to a lack of preparation on the part of the federal government and other authorities, testing for the virus is limited, meaning there likely are many more cases than hospitals and labs officially have diagnosed.

Pres. Donald Trump in late February claimed the virus was a “hoax” that the Democratic Party devised in order to hurt Trump’s reelection prospects. Trump since has changed his messaging as the pandemic escalates.

Many states and localities have shuttered bars, restaurants and events and banned large social gatherings in order to slow the pace of infections. Tens of thousands of Americans lost their jobs in the span of a few days in mid-March 2020.

New York officials anticipate the peak demand for medical services will occur at the end of April 2020. In addition to hosting Comfort, New York has put out a call for retired doctors, nurses and other healthcare workers to create a new medical “reserve force.”

Cuomo said the state also is looking for locations where the military can set up field hospitals.