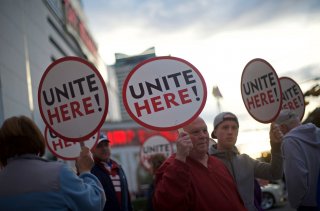 A labor union that represents 300,000 hospitality workers said Wednesday it expects upwards of 90% of its members could soon be out of a job due to coronavirus.

The Unite Here labor union represents people who work in hotels, airports and casinos, industries that have been decimated by massive drops in demand due to the outbreak, HuffPost reported.

Unite here said it’s lower-bound expectation is that 80% of its workers could be out of a job. If the union’s estimate pans out, some 240,000 to 270,000 hospitality workers would be soon out of work.

“All workers are left with at this moment is an unemployment system that’s overloaded, a sick leave system that may provide checks someday, and rent that’s due on April 1,” the president of a Unite Here chapter in Seattle, Erik Van Rossum, told reporters on a call Wednesday.

At least nine states have announced temporary shutdowns of bars and restaurants to stem the spread of coronavirus.

On Wednesday, one of the nation’s most renounced restaurant companies, Union Square Hospitality Group, laid off 2,000 employees, or 80% of its total workforce. The company operates 18 restaurants in New York City and two in Washington, The New York Times reported.

“In the absence of income, restaurants simply cannot pay our non-working team members for more than a short period of time without becoming insolvent,” said Danny Meyer, the head of the Union Square Hospitality Group. “In that scenario, no one wins.”

D. Taylor, the president of Unite Here, pilloried the paid leave bill passed by the Democratic-controlled House on Saturday as “completely ridiculous,” saying that it didn’t do enough to help affected workers.

Andrew Rigie, head of the NYC Hospitality Alliance, a lobbying group run by business owners in the hospitality industry, urged the government to enact immediate relief for displaced restaurant workers.

“Our government leaders  must immediately enact an emergency, temporary basic universal income for restaurant workers who have been displaced, and begin implementing a restaurant rescue plan,” Rigie said in an email, the NY Times reported. “We cannot wait.”