House Republicans Are Taking Another Shot At Reforming America's Healthcare 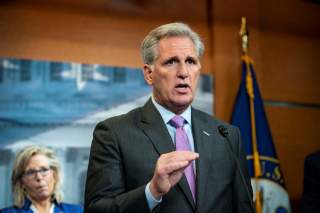 The Republican Study Committee, a group of conservative House Republicans, has issued a health reform proposal. It's not the first thing on the RSC web site, but scroll down and you'll find it. The proposal has much to commend it.

Notably, it would repeal the Affordable Care Act's consistently unpopular preexisting-conditions provisions, which not only make coverage worse for the sick but leave every ACA enrollee with inadequate coverage. (Can you say, "junk insurance"?) One of the reasons Republicans suffered losses in the 2018 mid-term elections was their failure to expose how those supposed consumer protections are harming the very patients they purport to help. Had they done so, they could have turned independents and even many Democrats to their side.

Ironically, after launching a full-throated denunciation of those provisions, the RSC plan then turns around and proposes to apply a modified version of them to consumers who switch from one private health insurance plan to another.

One can perhaps forgive this harmful inconsistency, though, because the RSC plan would codify the Trump administration's rules regarding short-term plans. Embedding those rules in statute would free consumers to avoid the RSC plan's harmful regulations; allow consumers to purchase affordable, renewable term health insurance; and improve the functioning of that market by providing regulatory certainty to insurers.

A Missed Opportunity on Government Spending

The RSC plan gets stuck in the mud when it proposes to repackage the ACA's Exchange subsidies and Medicaid spending into per-capita "block" grants, which states could use to expand Medicaid or to create high-risk pools for consumers with preexisting conditions.

Turning an existing stream of federal spending (the Exchange subsidies) into an intergovernmental transfer (the per-capita grants) is a bad move. It diffuses responsibility for that spending and the taxes (or deficits) that fund it. It is likely that spending would grow at a much faster rate under the RSC plan, as states are much more powerful/sympathetic/effective lobbyists than the private insurance companies that receive Exchange subsidies. As much as insurers abuse that stream of federal spending, the abuses will only get worse under the RSC proposal.

A per-capita block grant, moreover, is not a block grant at all. It would preserve the existing Medicaid matching grant system's incentives to increase enrollment, because expanding enrollment is how states would get more money from the federal government.

Congress should eliminate that spending, or at the very least use it to reform Medicaid with a system of zero-growth block grants as a step toward eliminating it. States that want such programs should fund them with their own tax revenues and bear full responsibility for the results.

The RSC also includes a sleeping giant of a proposal, one that would deliver the largest effective tax cut any living American has ever seen, on the order of $11 trillion over the next decade..

A quirk in the federal tax code (the tax exclusion for employer-paid health premiums) allows employers to control roughly $15,000 of the earnings of workers with family coverage and $6,000 of the earnings of employees with self-only coverage. Those numbers represent the average amounts employers pay toward health benefits for their workers. Even though employers are signing the checks, those funds come out of workers' wages. Absent the exclusion, labor markets would force employers to provide those funds to workers as cash or other forms of compensation. Under the current exclusion, if workers insist on receiving that compensation as cash wages, they must pay income and payroll taxes on it. In effect, the tax exclusion for employer-paid health premiums penalizes anyone who does not purchase a government-approved health plan.

Across all workers with employer-sponsored health insurance, that's a lot of employee earnings the exclusion allows employers to control: $828 billion in 2019 alone, or nearly one-quarter of total U.S. health spending. Over the next decade, it adds up to nearly $11 trillion. (If you want to know why the U.S. health care sector is so expensive and unresponsive to consumers, consider who is controlling the money. Spoiler alert: government directly controls a further one-half of national health expenditures.)

The RSC proposal would free workers to control their $14,000 for the first time ever. It would do so by expanding tax-free health savings accounts (HSAs).Workers could use that money to purchase medical care, to purchase the health plan of their choice, or to save for future medical expenses, all tax-free. Over the next decade, it would return $11 trillion to the workers who earned it. Giving consumers control of the nearly one-quarter of U.S. health care spending that employers currently control cannot help but make the markets for health insurance and medical care more responsive to consumers. It would also represent an effective tax cut 38 percent larger than President Reagan's tax cuts and four times the size of President Trump's tax cuts.

The RSC has not yet indicated how it would keep this proposal budget-neutral, which regrettably puts them in the same camp as Medicare for All supporters like Democratic presidential candidate Sen. Elizabeth Warren (D-MA).

Even so, the RSC proposal creates a stark contrast going into the 2020 election cycle. Medicare for All supporters want to give that $11 trillion to the federal government. ‘Large’ HSAs would give it back to the workers who earned it.

This article originally appeared at the Cato Institute.