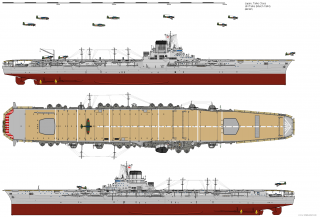 Key Point: A single torpedo can be a death knell to even the most advanced of aircraft carriers.

Six torpedoes from the U.S. Navy submarine USS Albacore headed toward the Japanese aircraft Taiho as she launched her planes on the morning of June 19, 1944 during the fighting on the Philippine Sea — the largest carrier battle in history and the last major Japanese carrier operation.

“White bubbles were seen on the surface,” Cmdr. Shioyama Sakuichi later wrote. “Torpedo wakes! The loudspeakers on the bridged blared a command and some of the crew felt cold.”

One torpedo struck the ship, sending up a column of water on the starboard side in front of the bridge. One pilot flying near the carrier dived onto another torpedo, destroying it. The other four torpedoes missed.

Seven hours later, Taiho blew up and sank, taking with her 1,650 sailors and dozens of aircraft. Five hundred sailors survived. It was an irrecoverable blow to Japan’s fleet at this stage of the war and occurred during her first combat mission, only three months after her commissioning.

As a matter of engineering, Taiho shouldn’t have gone down like this, as the carrier was designed to be more heavily armored and protected than her predecessors.

Taiho was unusual for a Japanese carrier when she first launched on April 7, 1943, as she was the first of the Imperial Japanese Navy’s flattops to feature an armored flight deck. Previous decks were made of wooden planks, which saved weight and made for a more-stable design. The downside, obviously, was that bombs could more easily penetrate wooden decks.

To the IJN’s horror during the 1942 Battle of Midway, a 1,000-pound bomb dropped by a U.S. Navy SBD Dauntless dive bomber penetrated the deck of the carrier Kaga — one of several bombs which fatally ignited fuel and gas inside the ship. Kaga was one of four Japanese carriers destroyed during the battle.

Midway was not the impetus for the heavily-armored, 855-foot-long and 37,000-ton Taiho. The IJN first established the carrier’s requirements in 1939, three years before the battle, and put down her hull in 1941, although this lengthy period may have been because of changing requirements as Japan monitored the United Kingdom’s wartime carrier operations.

It’s worth noting that the Royal Navy preferred armored-deck carriers given the need to operate in the Mediterranean, where ships were vulnerable to swarms of attack planes operating from nearby land bases, unlike the Pacific where the distances were much more far flung — or so the Japanese and American navies believed at the time.

Either way, Taiho would be more advanced — and beautiful — than any Japanese carrier to that point, and in theory capable with her steel flight deck of withstanding greater punishment while launching up to 84 aircraft. However, by 1944 the IJN trimmed down her compliment to 77 planes — 27 fighters, 27 dive bombers, 16 torpedo bombers and three reconnaissance planes.

She was also heavy, with a higher proportion of her weight to armor than every Japanese carrier except the Shinano, a converted battleship — originally a Yamato-class superbattleship — sunk by U.S. torpedoes in November 1944. Taiho also had the first island bridge as opposed to a mere conning tower.

A fascinating and highly-detailed look at Taiho‘s construction is available at the Armored Aircraft Carriers in World War II project. The details are important, because the reason for the carrier’s doom lies in the details.

For one, because Taiho was so heavy, she sat low in the water, and her bottomost hangar deck was almost at the waterline.

The lift wells, where aircraft traveled to and from the hangar deck to the flight deck on elevators, actually sat below the waterline at their lowest point. When the torpedo from USS Albacore struck, the explosion tore into an elevator pit and into tanks — unfortunately placed below the lift well — containing aviation fuel.

Inside the lift well flooded water and a mixture of flammable fuel.

That mixture emitted vapors, which then spread throughout the carrier after the damage control team opened all of Taiho‘s hatches and flipped on the ventiliation systems. It was a terrible mistake. Once there was a spark, Taiho — like a bomb — exploded.

This piece was originally featured in May 2018 and is being republished due to reader's interest.