How AI-Powered Data Will Become Every Army Commander’s Wingman 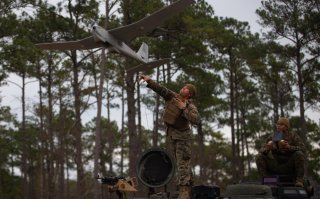 Information is now considered a full-fledged weapon of war due to recent technological breakthroughs in artificial intelligence (AI), high-speed computing, and secure networking technologies, all of which are now shaping weapons development and operational planning.

The Army’s Project Convergence “campaign of learning,” for example, used AI-enabled computing to organize, analyze, and distribute otherwise unmanageable amounts of networked sensor data across multiple domains in seconds. This process, now evolving to incorporate other U.S. military services and even international partners, shortens the sensor-to-shooter time from minutes to seconds. For instance, commanders moving toward hostile forces in a combined arms maneuver formation can receive threat and targeting information in near real time in order to quickly launch necessary counterattacks and defenses. Moreover, the incoming information is organized in seconds by Firestorm, an AI-capable computer that performs analytics on data arriving from drones, aircraft, ground troops, and even armored vehicles. A synergized view of the battlefield is presented to human decisionmakers, offering them specific recommendations regarding which weapon or counterattack method would be optimal for a particular threat scenario.

Senior Army weapons developers involved with Project Convergence tell the National Interest that data itself is rapidly becoming a “weapon of war.’

“Now I fully understand the importance of data in the future and giving our soldiers weapons, like AI algorithms to find targets inside all that data. And then making pathways for them to be able to streamline that call for fire right to the right to the platform,”  Maj. Gen. John Rafferty, director of the Long Range Precision Fires Cross-Functional Team at Army Futures Command, told the National Interest in an interview.

During Project Convergence 2020, forward operating mini-drones were able to find enemy targets in high-threat areas while manned platforms operated at safer standoff ranges. These mini-drones, called “air-launched effects,” gathered time-critical data and then helped network it to reach larger drones, ground-based soldiers, and AI-empowered command and control technologies. By bouncing incoming sensor data off of a vast, seemingly limitless database and considering multiple variables in relation to one another, AI-capable algorithms can analyze previous scenarios, weapons performance, and key attack variables such as weather, range, terrain, or enemy maneuvers. These real-time analytics can find and communicate optimal courses of action for commanders and human decisionmakers when they are faced with an immediate need to respond to enemy attacks.