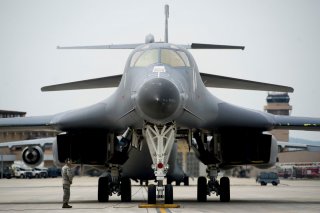 The U.S. Air Force wants to hang a whopping thirty-one long-range hypersonic cruise missiles on the B-1 bomber.

The plan, which requires changes to the B-1’s airframe, could motivate the service to prolong the service life of some of the beleaguered B-1 fleet.

The Air Force’s Global Strike Command hopes to arm the B-1 with the new AGM-183 Air-Launched Rapid Response Weapon (ARRW), a Mach-five-plus missile the service is developing. The Air Force expects the ARRW to enter service in the mid-2020s following extensive testing.

“My goal would be to bring on at least a squadron’s worth of airplanes modified with external pylons on the B-1, to carry the ARRW hypersonic cruise missile,” AFGSC chief Gen. Timothy Ray said, according to Air Force Magazine.

A B-1 squadron has eighteen aircraft.

When Rockwell built the original one-hundred B-1s back in the 1980s, it installed external pylons for nuclear-tipped cruise missiles. When the Air Force removed the B-1’s nuclear mission in 1995, it also removed the pylons. For more than twenty years, the B-1 has carried all of its munitions in its internal bay.

Ray said the Air Force could restore eight pylons on each of the eighteen B-1s he wants for the hypersonic mission. With external and internal carriage, a B-1 could haul as many as thirty-one ARRWs, a powerful loadout for the nearly forty-year-old bomber.

But the plan to rearm the B-1 doesn’t change the Air Force’s other plan for the swing-wing bomber. The Air Force is asking Congress to let it retire early seventeen of the sixty-one B-1s still in service.

As recently as 2019, the Air Force planned to keep sixty-one 1980s-vintage B-1s and twenty ‘90s-vintage B-2s until the 2030s. Meanwhile, the service would upgrade its seventy-six B-52s that first flew in the early 1960s and buy between one-hundred and one-hundred-fifty new B-21 stealth bombers.

The B-21, the first copy of which is under construction at Northrop Grumman’s facility in Palmdale, California, could fly for the first time as early as 2021.

But the Air Force’s $169-billion budget proposal for 2021, which became public in early February 2020, would retire the seventeen B-1s and a single B-2 a decade early. The B-1s in question are badly in need of maintenance and upgrade after hard use over the Middle East and Afghanistan.

“Currently a portion of the B-1Bs are in a state that will require tens of millions of dollars per aircraft to get back to a status quo fleet in the short term until the B-21 Raider comes online,” Air Force Global Strike Command stated.

“As such, Air Force officials proposed the retirement of 17 structurally deficient B-1Bs in 2021 so that maintenance dollars and manpower can be focused on the healthiest aircraft in the fleet,” the command added.

And it’s safe to assume the healthiest of the remaining healthy B-1s are the ones the Air Force would modify to carry ARRWs. Those B-1s could be the last in the inventory as new B-21s finally begin replacing existing bombers.

The ARRW is one of two hypersonic missiles the Air Force is developing. In addition to the B-1, the Air Force plans to arm the B-52 and the new F-15EX fighter with the speedy missile.