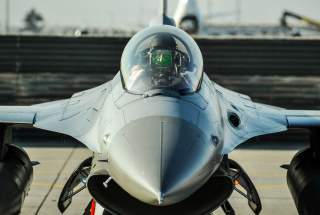 With the U.S. Air Force potentially retiring the long-serving Boeing F-15C Eagle in the near future, Lockheed Martin’s F-16 Fighting Falcon could end up picking up the slack.

That means that the venerable fighter could be pressed into service as an air superiority fighter to supplement the stealthy fifth-generation Lockheed Martin F-22 Raptor air dominance fighter and the F-35 Joint Strike Fighter.

The Fighting Falcon has always been a capable air-to-air fighter, but as enemies such as Russia and China field new fifth-generation stealth fighters such as the Sukhoi Su-57 or Chengdu J-20, it is possible that the F-16 might be useful supplement to detect, track and engage those threats.

The reason the F-16 could be useful as a supplement to the F-22 and F-35 is because as a fourth-generation fighter, it is readily adaptable and can carry external sensor pods. The key in this case is Lockheed Martin’s Legion Pod—which is equipped with a powerful long-wave infrared search and track (IRST) sensor called the IRST-21—which could be integrated on the F-16 if the Eagle is retired. The Air Force has already awarded Boeing a contract to integrate the Legion onto the F-15C, but Lockheed Martin notes that the pod has been flight tested extensively on the F-16 too.

A flight of F-16s equipped with Legion Pods could be a potent weapon against enemy stealth aircraft. Indeed, the U.S. Navy—which is equipping its forthcoming Block III Boeing F/A-18E/F Super Hornets with a version of the same IRST sensor—considers the pod to be its primary long–range air-to-air counter-stealth weapon. Indeed, the service had already conducted trials at Fleet Exercise 2017 to prove that capability.

Capt. David ‘DW’ Kindley, the Naval Air Systems Command’s (NAVAIR) F/A-18 and EA-18G Program Office (PMA-265) program manager, said that he could not talk about the specific types of platforms that the Navy practiced against during Fleet Exercise 2017. “Can’t talk about specific experiments and specific threats, but IRST is designed to be a long-range counter-stealth technology,” Kindley told reporters in May.

“If you have a single IRST ship, with your IRST, you can get a line of bearing—it’s going to see a hot spot out there, what direction it’s in, but it doesn’t have the distance. You don’t have a weapons quality track,” Bob Kornegay, Boeing’s capture team leader for domestic F/A-18E/F and EA-18G programs, told reporters. “Now if you combine two aircraft, the fusion algorithm, now you have lines of bearing from two different sources. Where those two sources cross, the algorithm is going to compute a weapons quality track on that aircraft. So that’s a huge advantage for the warfighter to see that long before you’re in the enemy’s radar range.”

The F-16—which can be equipped with the same IRST-21 sensor—has two out of the three elements needed to detect, track and generate a weapons quality track on an enemy jet such as the Su-57. The jet can be equipped with the IRST-21 and it will eventually be upgraded with new versions of the Modular Mission Computer, which will likely have processing power comparable to the DTP-N.

However, while the F-16 can be equipped with a datalink comparable to the TTNT, the Air Force has not adopted such a standard as of yet. It is not clear if the standard Link-16 offers enough bandwidth—and the F-16 currently has enough processing power installed—to run the Navy’s fusion algorithms to generate a weapons quality track using data from two or more Fighting Falcons. However, the Air Force—or future foreign customers—do have the option to upgrade to a faster datalink in the future if they so choose.

The F-16, nonetheless, might not want to close in on an enemy jet such as the Su-57, and might be better served by passing its targeting data to an F-22, which is more capable of tackling the threat once it is detected. However, given that neither the F-22 nor the F-35 can carry the externally mounted Legion Pod without compromising their stealth, the F-16 would be a useful supplement to both jets because it can pass data to those more capable fighters. Working as a team, the F-22, F-35 and F-16 would be more than able to handle the Su-57.

At the end of the day, none of the fighters in the U.S. inventory were designed from the outset to counter enemy stealth fighters like the Su-57 or J-20. The Air Force has started to study the next-generation Penetrating Counter Air (PCA) successor to the F-22 Raptor. The PCA will be designed to take on enemy stealth fighters from day one, and as more of these threat aircraft enter service, the more urgent the need will become to field that new air superiority capability.