How the Air Force Is Slowly Going Green 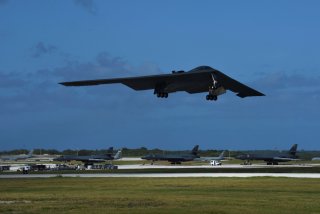 Last September, the U.S. Air Force announced plans to put forward “a concerted effort to reduce contamination of air, soil, and water by eliminating pollution at its source.” The occasion for the announcement was the United States’ annual Pollution Prevention Week.

Recent efforts, as announced at the time by the U.S. Air Force, included recycling and reusing construction materials. And the branch has more plans.

"We are focusing on analyzing data behind current Air Force hazardous materials usage, waste generation, and toxic release inventory so we can identify the right technological investments and comprehensive solutions to apply to pollution prevention across the service.”

In October, the Air Force announced that it had partnered with Twelve, a chemical technology company, to do something that sounds like science fiction: making “jet fuel out of thin air” through a process called carbon transformation. The idea is that someday, the “carbon transformation platform” could enable deployed units to “create fuel on demand.”

“With carbon transformation, we are untethering aviation from petroleum supply chains. The Air Force has been a strong partner in our work to advance innovative new sources of aviation fuel,” Twelve co-founder and CEO Nicholas Flanders said in that October announcement.

This week, Task and Purpose looked at how Twelve’s idea would work. The story noted that the Air Force runs through about two billion gallons of gas each year, which costs $7 billion.

Task and Purpose quoted some experts who were skeptical about the technology’s potential because there might not be enough carbon in the air for the idea to work. Another expert saw a potential problem with “generating enough energy to pull the carbon dioxide out of the air.”

That isn’t the Air Force’s only potential tech for the future—additional plans include using biomass, and a concept known as exergy.

Meanwhile, the AP reported this week that a group in Guam is fighting the Air Force’s plans to “blow up bombs and other waste munitions” at a U.S. base there, fearing potential environmental hazards such as contamination of water supplies and threats to endangered species.

The group, Prutehi Litekyan: Save Ritidian, has filed a lawsuit seeking to protect resources in Guam.

“I don’t want the Air Force to poison the ocean my children swim in, the water we drink, and the sacred land we all depend on,” Maria Hernandez, a member of the group, told the AP.