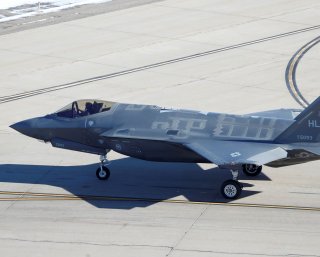 Air-to-Air combat, enemy targeting and “beyond visual range” combat are all missions F-35s and F-16s will conduct against mock-enemy aircraft in a series of upcoming Air Force war preparations.

The operational training combat missions will include air combat maneuvers, dogfighting and “beyond visual range” air attack engagements. The F1, Zins explained, is now being configured with a radar upgrade, improved representation in the electromagnetic spectrum, radar warning receivers and visual lookout awareness.

While specific threats from major-power nation-states were not discussed per say by developers as they pertain to the operational elements of the training, Zins did state that the mock-combat will replicate advanced combat and seek to refine Air Force performance against sophisticated adversaries.

The F1 is “on the cusp” of being a fourth-generation aircraft from an aerodynamic perspective and is therefore capable of advanced air-to-air combat, including dogfighting. It can also reach speeds of Mach 2.1.

The F-35 is less likely to dogfight during the op combat maneuvers as it is equipped with long-range sensors and electro-optical targeting technology enabling the aircraft to see, detect and destroy threats before it is seen itself. While it is engineered to dogfight if needed, the F-35 has intelligence, surveillance, and reconnaissance components which distinguish it in a unique and unprecedented way.

Electronic warfare can be another key area of engagement as the F-35 can also operate beyond visual range in some respects. For instance, the concept would be to sense and detect and potentially jam enemy electronics to remain “invisible” to enemy radar.

The current exercises will focus upon air-operations, yet the Air Force does plan to expand the program to include air-to-ground Close Air Support as it continues to evolve.

While not the size of major training operations such as the Air Force’s Red Flag exercise, the exercises will be ongoing for many years. The Air Force deal with ATAC calls for as many as 3,000 sorties per year for 4.5 years. They are slated to begin in the Fall of this year.